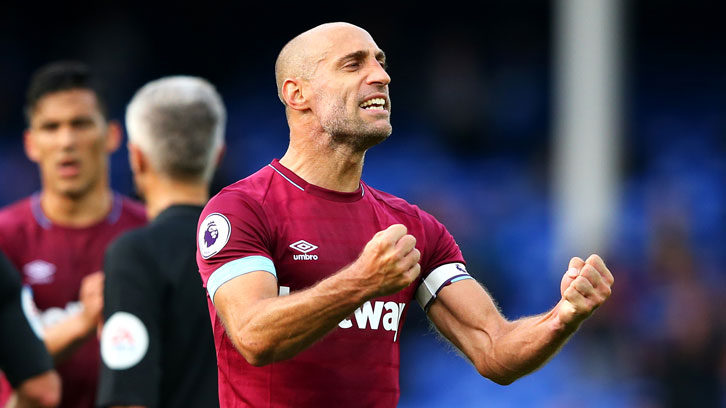 West Ham United has issued the Club's Retained List of players, with Pablo Zabaleta, Carlos Sanchez and Jeremy Ngakia all to leave the Club when their respective contracts expire on Tuesday 30 June.

Zabaleta departs after three seasons in which he made a total of 80 appearances, scoring a solitary goal in an FA Cup win at Gillingham in January 2020.

The former Argentina World Cup finalist, who arrived on a free transfer from Manchester City in the summer of 2017, has become a firm favourite in east London for his commitment, professionalism and leadership.

Unfortunately, an injury has prevented him from accepting the Club’s offer of a short-term extension until the end of the disrupted 2019/20 season.

Sanchez departs after playing 18 times over the course of two seasons. The experienced Colombia international was unfortunate to suffer a serious knee injury early on in his debut season that prevented him making more of an impact for the Club.

Academy of Football graduate Ngakia, who has made five first-team starts in 2020, is also leaving the Club after not signing a new contract.

In line with our structure and policy, Jeremy was offered significantly improved terms to reward his breakthrough into the first-team squad this year, along with further contractual enhancements linked to his future progress and success.

However, the player and his representatives declined to accept any of the offers, and also turned down a short-term extension until the end of the current season.

The Club would like to thank Pablo, Carlos and Jeremy for their service and wish them well in their future careers.

*You can watch an exclusive West Ham TV interview with Pablo Zabaleta, reflecting on his three seasons as a Hammer, on whufc.com Thursday evening.