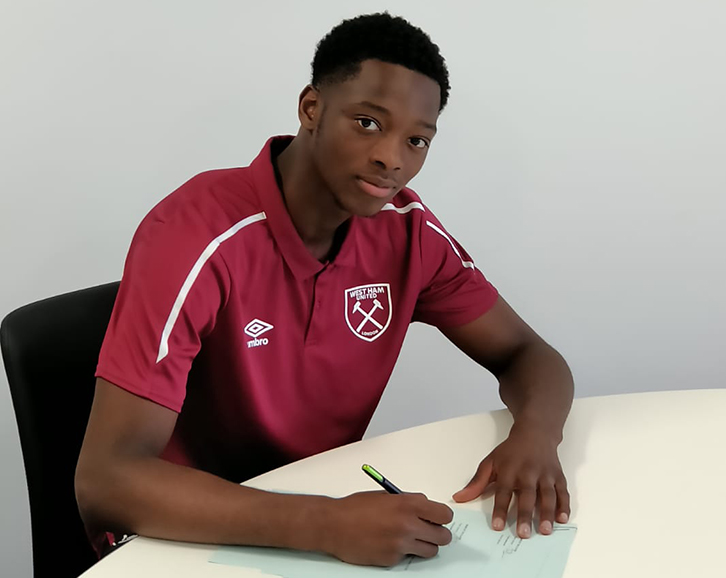 Last week, seven of the Academy of Football’s most promising scholars put pen to paper on their first professional contracts – the first chapters in their fledgling football stories.

All seven have enjoyed strong campaigns at Under-18s level under Lead Coach Kevin Keen this season, but in goalkeeper Daniel Jinadu’s case, that impression extended both to the Hammers’ U23s squad, as well as on a global scale with Nigeria at the 2019 FIFA U17 World Cup.

Frequently training with the U23s, while still making five appearances with the U18s – including pulling off an impressive penalty save against Aston Villa in December – Jinadu’s all-round game as a goalkeeper continues to develop rapidly in Claret and Blue.

“I was absolutely ecstatic to sign!” Jinadu beamed. “It’s what I’ve been working for for so many years, since I was seven and started playing football in goal. I was just so happy for that big moment to finally arrive.

“My family and everyone have made so many sacrifices to allow me to get to the position I’m in now, so it made me feel so good to make them proud in this way.

“I can’t wait to just get out on the pitch and show what I’ve got, show the fans what I can do. I’ll rest myself and then go again next season.”

Stepping up the next stage is becoming something of a habit for Jinadu, who joined the Academy’s ranks in January 2018 as an Under-16 after a spell training with Chelsea.

When I first came and trained with Joe Hart, I was like, ‘Wow! I used to watch you on TV!’ and then, suddenly, I was training with him

As part of a goalkeepers’ collective which operates throughout the Club, inspired by goalkeeping coach Xavi Valero, Jinadu soon found himself training with the Premier League keepers whose careers in Claret and Blue he aspires to replicate.

“Being at the Academy was quite different to what I’d experienced before, the way they do things, but I’ve really developed in that way,” he explained.

“I trained with goalkeepers such as Joe Hart and Adrian, and in the Under-23s with Nathan [Trott] and Joseph [Anang]. At such a young age, that really helped me learn and develop – I took something from each of them and just how good they are.

“When I first came and trained with Joe, I was like, ‘Wow, I used to watch you on TV!’ and then, suddenly, I was training with him. He was really nice, encouraging me and helping me develop. It’s just been a really good experience.

“In the Academy, [goalkeeping coaches] Billy Lepine and Jerome John have been excellent to me ever since I first arrived. They always help me in different ways, helping me do extras, practice my kicking, as well as sitting down and giving me honest criticism after my games, which has helped me improve.” 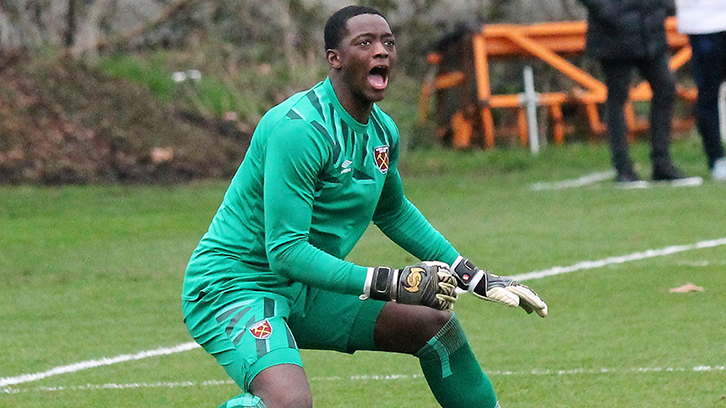 It is clear that the act of stepping up and taking on responsibility is something Jinadu relishes, seeing it as an opportunity to further himself as a young footballer.

“My personal highlight so far was going to the Switzerland training camp with the first team last summer,” he recalled.

“Actually having that elite experience of going on pre-season with them, seeing how it’s done, how rigorous and how hard-working they are, and the quality of all the players… having that experience was really good for allowing me to see what it’s actually like playing at that top level.

“You have to be on it in training all the time. It was a really big learning experience for me.”

It is that very elite level which Jinadu – who turns 18-years-old this weekend – harbours ambitions of making his own during his future career with West Ham United.

He explained: “Next season, I’d hopefully just like to keep developing as a goalkeeper – developing my skills, my resilience, my mentality – as well as just get more game time under my belt.

“I’m dreaming big: my dream is to play in the Premier League one day, so I just hope to one day set foot on the pitch in the top-flight, and if I keep working hard, hopefully it will come true.”

Halajko: There were lots of positives in our performance
Last Match
Tuesday 19 January 18:00
London Stadium