Mark Noble: We need to keep the winning momentum going 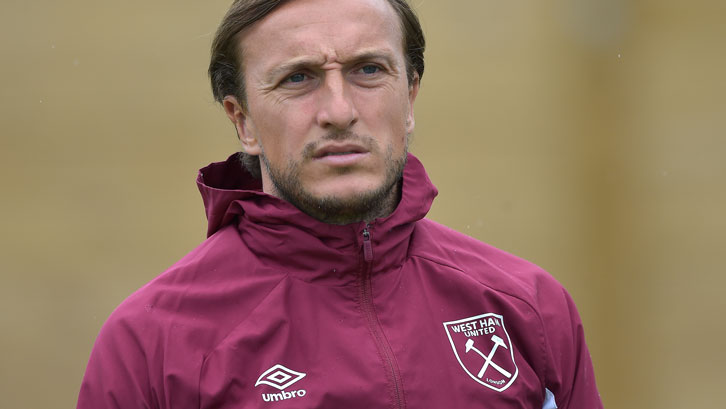 Mark Noble has hailed his West Ham United teammates ahead of a busy week of Premier League football for the Irons.

Club captain Noble, who has returned to training after recovering from the tight hamstring that ruled him out of Wednesday’s thrilling 3-2 win over Chelsea, will join the squad for three games in the space of seven days.

First up, the Hammers travel to St James’ Park on Sunday to face in-form Newcastle United, before welcoming Burnley to London Stadium in midweek, and finally travelling to bottom club Norwich City on Saturday 11 July.

We now have three games in six days, starting at Newcastle on Sunday, followed by Burnley and Norwich, and we need to keep the winning momentum going

“Wow, how good was that win over Chelsea on Wednesday?” Noble wrote in his column in London’s Evening Standard. “I actually enjoyed listening to some music on the car radio on the Thursday morning school run, whereas normally I’m thinking about a million other things to do with the Club.

“I missed out with a hamstring problem. It was sore after training the day before the Chelsea game. I spoke to the manager and we didn’t want to risk it. It’s more stressful watching, though. Sitting up in the stand, I nearly pulled the hamstring five times!

“Early in my career, if I wasn’t involved and the team won, I used to think, ‘Was it because I didn’t play?’ Now, though, as you get older and with the position we’re in and just how much staying in the Premier League means to everyone, I was so happy, I felt just like a fan!”

With Noble, Sebastien Haller and Arthur Masuaku all fit again, Angelo Ogbonna making an impressive return from injury, plus the likes of midweek match-winner Andriy Yarmolenko and Jack Wilshere pushing for more game-time, Hammers boss Moyes has a multitude of options to choose from.

The No16 knows the Irons possess a strong squad, but it is now a matter of turning that talent into points on a consistent basis.

“I thought Angelo Ogbonna made a massive difference on his return,” he observed. “The fans probably can’t hear it, but he doesn’t stop talking to the back-four and midfield, sometimes in more than one language!

“When Yarma latched onto that ball in the 89th minute and cut back onto his left foot, I knew, not hoped, that he would score, because he is clinical in those positions. I see him doing it every day in training.

“When you play the bigger teams, you have to unsettle them, take them out of their comfort zone, and Michail Antonio did that with his running and hold-up play.

“The most important thing is we picked ourselves up [after the disappointment of having another ‘goal’ ruled out by VAR and then going 1-0 down] and won. The pleasure of winning doesn’t last long, though. We now have three games in six days, starting at Newcastle on Sunday, followed by Burnley and Norwich, and we need to keep the winning momentum going.”