Littlejohn: This is a fantastic opportunity for me

Opportunity knocks but once.

That is the view Ruesha Littlejohn has taken of her chance to play in the Barclays FA Women’s Super League with West Ham United.

The attacker has been training with the Irons since late last year and, having featured once on non-contract terms, put pen to paper on a deal until the end of the season with Matt Beard’s side last week.

The former Arsenal, Liverpool and Celtic forward had been without a club since leaving London Bees at the end of last season but, after linking up with the Hammers to initially maintain her fitness, Littlejohn is eager to make the most of her opportunities in Claret and Blue.

It’s a fantastic opportunity for me to test myself in training against them, against some of the best players in the league and get myself back up to that level

“I’m thankful to Matt for letting me come in and train with the team at first, and now he’s given me another opportunity; a longer opportunity,” Littlejohn said. “For me, it’s great. We’re working with coaches with great experience and a lot of the girls in the team are great players too.

“It’s a fantastic opportunity for me to test myself in training against them, against some of the best players in the league and get myself back up to that level. I’m happy to be here.”

Amid a number of injuries in the women’s squad, Littlejohn was given her first opportunity to pull on a West Ham shirt back in November, featuring as a second-half substitute in the 1-0 away Continental League Cup victory over Reading.

The Republic of Ireland international impressed during her debut outing but has had to wait patiently for her second chance, which came last Sunday. 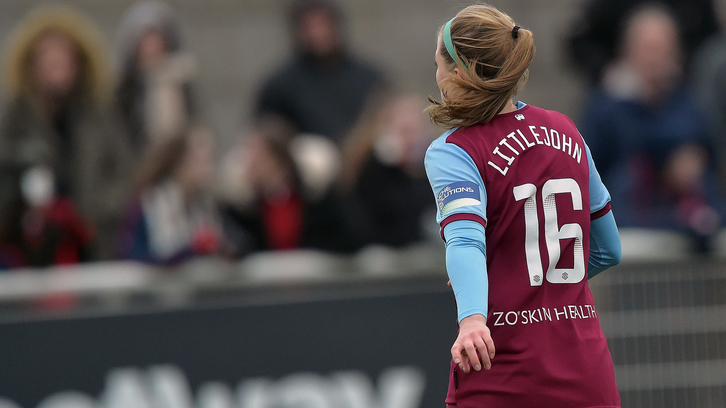 Littlejohn was again utilised from the bench, running out against defending league champions Arsenal at Rush Green Stadium. The game ended with mixed emotions for the 29-year-old; a first home showing for West Ham, just 24 hours after signing her contract, ended in a 2-0 defeat and the Irons’ elimination from the Women’s FA Cup.

There’s still plenty of football left to play though, and Littlejohn knows the second half of the season will be of paramount importance for West Ham United as the side seeks to better last season’s seventh-place finish in the WSL. 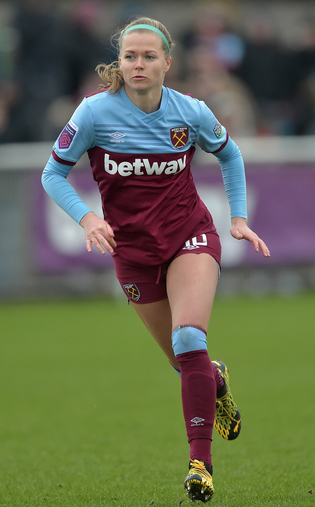 “It was nice to get on and get involved,” she continued. “But obviously losing the game 2-0 means we are out of the cup. It was a tough draw in the first place, Arsenal, but we need to go and learn from it and take the positives forward.

“It’s disappointing to be out of the cup so early but now we can focus on the league and start to climb the table and pick up points. We have a really good team here that should be higher up the division, so that’s what we’re aiming to do now.”

Having been in and around Beard’s Hammers for a number of months, Littlejohn has seen just how passionate and supportive West Ham fans are. The attacker was given a warm welcome to the pitch on Sunday and, despite a sudden downpour just after full-time, was sought for autographs and pictures as the Irons left the field.

Littlejohn is hopeful that the players can give them even more to cheer about in the coming weeks.

She said: “It’s a great crowd here. We’ve seen it on some of our better days, when we get victories, how much they get behind the team here. They make so much noise, which is so encouraging.”

With two West Ham appearances under her belt in two different cup competitions, Littlejohn is now targeting a run in the side in the Women’s Super League.

Tough tests await the Irons in the next few weeks, with two of the top three next up for West Ham, but Littlejohn is confident of picking up points.

Of course, the chance to impress with her personal appearances and potentially earn another contract may have crossed her mind too.

“That’s my plan!” she smiled.  “Hopefully I can do well in the next couple of months, show what I’m about, and maybe earn another contract. We’ll see how it goes.”

Laura Vetterlein: We want to finish with a win
Last Match
Sunday 23 May 16:00
London Stadium