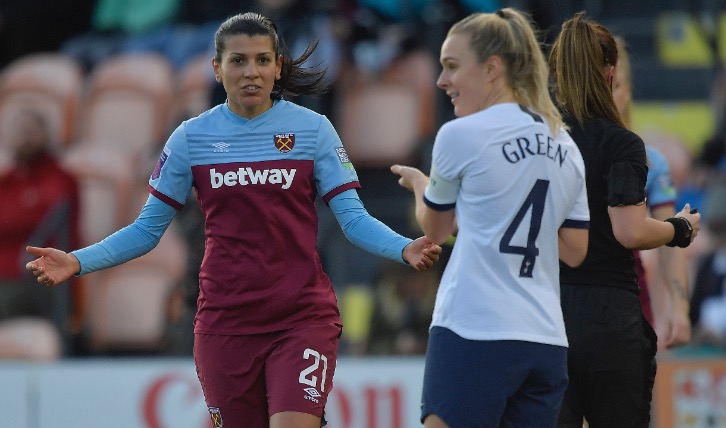 West Ham supporters thought Dali’s seventh goal of the season had secured a credible draw away at Spurs, after Emma Mitchell had put the home side ahead, but the Irons left The Hive emptyhanded because of Rianna Dean’s header in the sixth minute of added time.

Frustrated by the manner of the defeat, Dali believes the side needs to work even harder and cannot hide behind any excuses.

We have to be ready for games like this. We should be winning this game. Perhaps they showed more than us and we need to do more than we did.

“I’m really disappointed with the result,” the French international said. “It’s not the first time we’ve lost to Spurs this season and there’s no excuses. We have to be better. We have to be more consistent. I’m disappointed; we needed three points.

“Perhaps last weekend’s postponement played a part. It’s been over a month since we played, but that can’t be an excuse. We have to be ready for games like this. We should be winning this game. Perhaps they showed more than us and we need to do more than we did.”

She continued: ““Grace is a really good person, first and foremost. It’s really easy to communicate with her. She’s a really good player and brings something special to the team.

“She had a really good game, I think, and West Ham needs players like this. I’m happy she’s here with us.”

With two home games to come next for West Ham, Dali knows the Irons will need to be at their best over the next fortnight to claim the victories.

A league showdown with Brighton & Hove Albion will be followed by an FA Cup fourth round match with Arsenal, and the midfielder is excited to take on the Gunners in the Cup.

“We have Brighton at home this weekend first though, so we’re focusing on that now. It’s two home games in two weeks, and we want to win them both.”