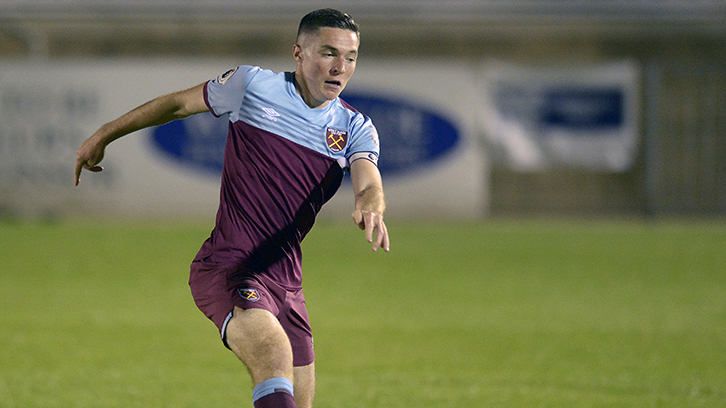 Promising midfielder Conor Coventry has joined League One club Lincoln City on loan until the end of the season.

The Republic of Ireland U21 international, who last week put pen to paper on a new three-and-a-half year deal with West Ham United, will spend the second half of the campaign developing with the Imps under manager Michael Appleton.

The 19-year-old midfielder, who has captained West Ham’s Under-23s to an unbeaten first half to their Premier League 2 Division 2 season, is set to test himself against senior EFL opposition during his time at Sincil Bank.

What’s most important now is what I can learn on the pitch as a player, and I’m looking forward to the test of playing senior competitive men’s football every day

Coventry could now be in line to make his debut this weekend when Lincoln travel to Shrewsbury Town’s New Meadow on Saturday afternoon.

Of the move, Coventry told whufc.com: “I’m excited to get started at Lincoln. I’ve been really impressed with the style of play they’re trying to commit to.

“I’ve learnt a lot about the club and I’ve spoken with their manager, Michael Appleton, who’s expressed his belief in me, which excites me.

“What’s most important now is what I can learn on the pitch as a player, and I’m looking forward to the test of playing senior competitive men’s football every day. I think Lincoln’s a really good place to do that and somewhere I could really excel.”

Academy Manager Ricky Martin said: “Conor has been outstanding this season as our U23s captain, and his ability to set standards on and off the pitch has been rightly rewarded with his new contract.

“On the back of that, we feel the next part of his personal development will be to face more senior football opportunities. With the position he plays in, he’ll be able to mix his game through them.

"Lincoln City have followed Conor closely and watched a lot of his games this season. They travelled away to see him play internationally, which is testament to them, and that’s why we feel they’re the perfect club for him.”

Coventry becomes the second young Hammer to join a League One side on loan this week, after winger Nathan Holland moved to Oxford United for the remainder of the season.

Martin added: “Our decision to loan out two players who have made a huge impact for us this season has not been an easy one, but we feel it is right for the benefit of them individually, so that hopefully they can come back in the summer as even better players.”

Everyone at West Ham United would like to wish Conor all the best for his loan spell at Lincoln.