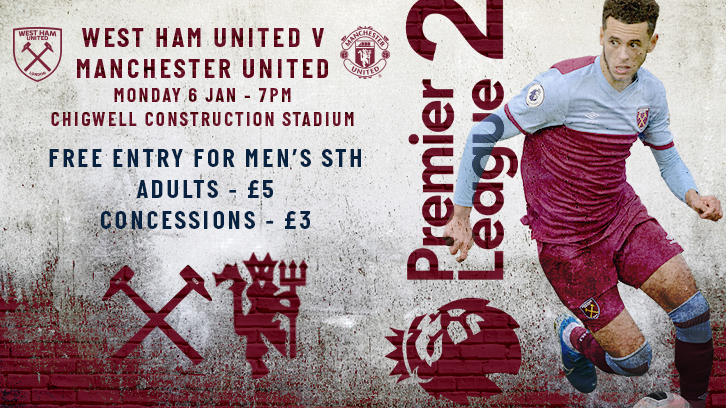 West Ham United Under-23s return to action with a tasty home clash with Manchester United on Monday 6 January – and Season Ticket Holders can watch the young Hammers in action for free!

The Irons kick-off 2020 with a huge match against their closest challengers for top spot, Manchester United, who sit just one point behind West Ham in second place.

With West Ham scoring the most goals so far this season in the division, with 43, and Manchester United boasting the best defence so far, with just 11 conceded, Monday evening’s match promises to be an exciting and pulsating encounter at the top of the table.

Men’s Season Ticket Holders can attend Monday evening’s match at the Chigwell Construction Stadium free of charge, meaning regular attendees at London Stadium can cheer on the next generation of West Ham players for nothing!

Tickets are available on the gate on Monday evening, with concessions costing just £3 and adult tickets at only £5!

Head down to the Chigwell Construction Stadium on Monday 6 January for this 7pm kick-off and watch West Ham United U23s take on Manchester United in a thrilling fixture between first and second place in Premier League 2 Division 2!