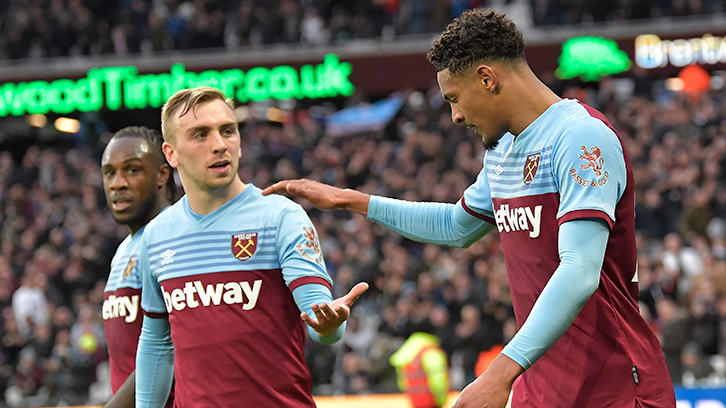 Jarrod Bowen scored on his West Ham United home debut as the Irons defeated the Saints 3-1 at London Stadium on Saturday afternoon.

A performance full of attacking intent throughout saw Bowen take less than a quarter-of-an-hour to put the Hammers ahead with a calm finish from Pablo Fornals' pass.

The Saints struck back inside the first half through Michael Obafemi's placed shot, but a show of strength from Sebastien Haller restored West Ham's lead shortly before the half-time whistle.

Strike partner Michail Antonio added a degree of comfort with a direct goal early on in the second half, a just reward for a game which saw many of West Ham's creative talents rise to the fore.

Off the back of such an encouraging display on Monday evening at Anfield, the Hammers came racing out the blocks, many of them taking the time to applaud the vocal home supporters before kick-off and enjoy the reciprocation.

Seeking West Ham’s first Premier League win in eight games, manager David Moyes set his stall out to attack from the off, with Declan Rice and Mark Noble anchoring a midfield which saw the attacking quartet of Fornals, Bowen, Haller and Antonio ahead of them.

An injury to Stuart Armstrong put an early halt to proceedings, but once the Irons found their groove, the pace, power and movement in that attacking line-up began to steamroll the visiting defence.

A first half of numerous chances truly opened after eight minutes when Antonio fed Fornals on the overlap. Haller peeled away to the back post, but the Spaniard’s outside-of-the-foot cross didn’t quite have the elevation to beat the last man, Ryan Bertrand.

Five minutes later, Antonio and Fornals combined on the counter to set the former on a three-on-one. Shepherded well, Antonio slightly overhit his pass and, with Bowen breaking stride to collect, Bertrand had just enough time to slide in and block.

Bowen was not to be denied. The former Hull man made the most of his moment, largely thanks to some slack Southampton defending as a loose pass gifted the ball to Fornals.

The Spaniard’s threaded through pass was left by Haller for the West Ham No17, and Bowen took a touch before lofting the ball across and over Alex McCarthy – a goal on his home debut within 15 minutes.

Then came Haller’s turn to come close. Antonio beat Stephens on the left and clipped the ball in but, unsighted by James Ward-Prowse’s attempted header, the Frenchman had fractions of a second to react and could only find the McCarthy’s midriff with his header.

When Southampton’s equaliser did arrive, therefore, it seemed harsh on the home side. Ward-Prowse’s low delivery from the right side was inviting, but it was the sheer loop on Michael Obafemi’s side-foot finish which carried it beyond Lukasz Fabianski’s clutches and into the roof of the net.

In keeping with the pattern of the match, West Ham continued to their aerial offensive, and five minutes before halftime, Haller’s persistence paid off – and it was a goal of real persistence at that.

The Frenchman did well to win the initial header against his marker to flick onto Antonio out wide. The return delivery was high, but Haller refused to be denied, out-jumping McCarthy to knock the ball past him, before sliding it in from an acute angle.

Buoyed by the goal, the same two strikers both played a part in the first real opening of the second half – and West Ham’s crucial third goal of the afternoon.

A long ball forward found Haller, who flicked on to Fornals. The Spaniard chested the ball before cushioning a soft pass it the path of the onrushing Antonio, who had the time, space and composure to place it past McCarthy.

Moments later, it was Bowen with an invaluable contribution, this time at the West Ham end, nicking the ball off Bertrand’s toe as he shaped to shoot from close range.

Within five minutes came an attack which spoke volumes of Haller's resurgent confidence. Turning on the halfway line, the striker's audacious ‘rabona’ pass put Antonio in on goal. Forced to arc his run to collect, however, the former Southampton man's low strike was deflected away by the legs of McCarthy.

The direct route continued to prove effective at creating chances for West Ham, with both Angelo Ogbonna and Fornals not quite able to connect properly with their shots at the end of such passages of play.

Ogbonna twice was forced into last-ditch interventions in the closing stages – the first an expertly timed tackle, the second a stooping header – but West Ham ultimately enjoyed a degree of comfort in the closing stages which befitted an exciting, energetic and productive performance, one which deservedly moved them out of the relegation zone into 16th.