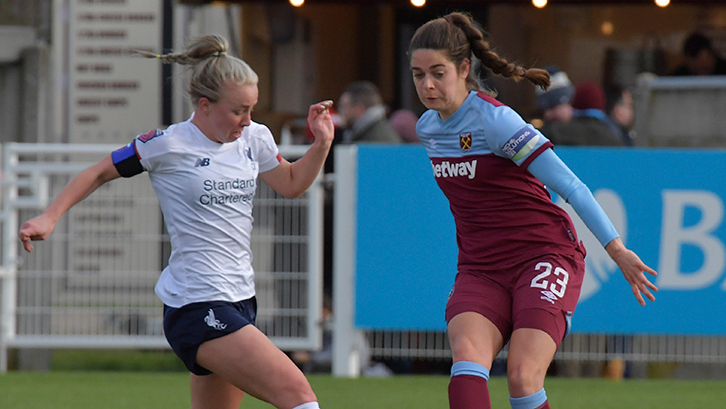 At the final whistle on Sunday afternoon, euphoria – for West Ham United midfielder Tessel Middag, the relief of three points.

The Dutch midfielder had played a huge part in her side’s 4-2 Barclays FA Women's Super League win over Liverpool at Rush Green Stadium, her tough tackling and composed passing helping the Irons forge a vice-like grip in midfield for much of the game.

Partnered by Kenza Dali and Julia Simic in the centre of the park, such control contributed to the Hammers going 2-0 up against the Reds inside the first half through well-taken goals by Adriana Leon and Martha Thomas.

After an initially tense opening, the floodgates opened, and Hammers and Leon took full advantage early on in the second half to put their side 4-0 ahead.

Liverpool went on to claim two late goals through Rachel Furness, but after a difficult run of form for her side, Middag could scarcely hold back her delight at West Ham’s return to winning ways.

“We’re over the moon really, because we’ve been eager to get another win for a long time,” the 27-year-old told whufc.com. “It took a while before we got three points again, but we’re just so happy we were able to win in front of our fans.

“I think we played well for the majority of the game as well, so not only did we get the points, but we can be happy with our performance.

“The last 20 minutes we conceded twice and that’s something we have to work on, our game management, but I was just really happy and relieved a little bit that we got the win.” 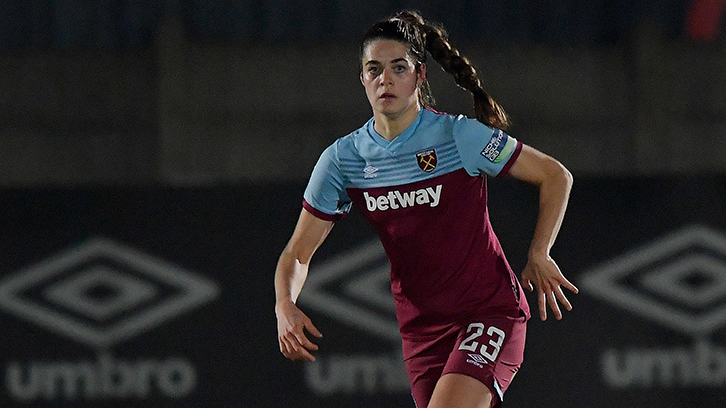 West Ham went into Sunday’s game without a goal or a victory in their prior three fixtures in all competitions.

Middag admitted that, while the squad were disappointed with their previous results, their desire to put things right may have also proved something of a catalyst for their excellent performance against Vicky Jepson’s Liverpool.

That the match also marked manager Matt Beard’s 50th in charge of the Irons only served as additional motivation for the duo.

Ever since a week or two ago, though, we’ve felt some new, fresh energy in the team. We’ve started with a clean slate

“We have been feeling like this in past games, but it just didn’t work for us somehow,” she explained.

“Ever since a week or two ago, though, we’ve felt some new, fresh energy in the team. We’ve started with a clean slate.

"Training has been really good as well – we’ve been enjoying it. We haven’t been moaning about results, we’ve been very encouraging, and I think you can see that on the pitch.

“Congratulations as well to Beardy on his milestone! He has a lot of experience and knows how to win in this league. It’s always tough for a manager when a team is in a bad spell, so I’m happy for everyone and for him as well.”

West Ham’s next fixture falls at Manchester United’s Leigh Sports Village on Sunday 22 March, with an international break interceding, and Middag is looking forward to using the time – in keeping with her character – productively.

“We’ll miss a few players for one and a half weeks because of the international break, but for the girls who are staying here, we have a week of training with the full squad,” she explained.

“We have a team bonding activity as well which should be good, and then in the week after, we’ll have a little bit of a smaller group. I’m really looking forward to working hard and improving with the rest of the girls.”