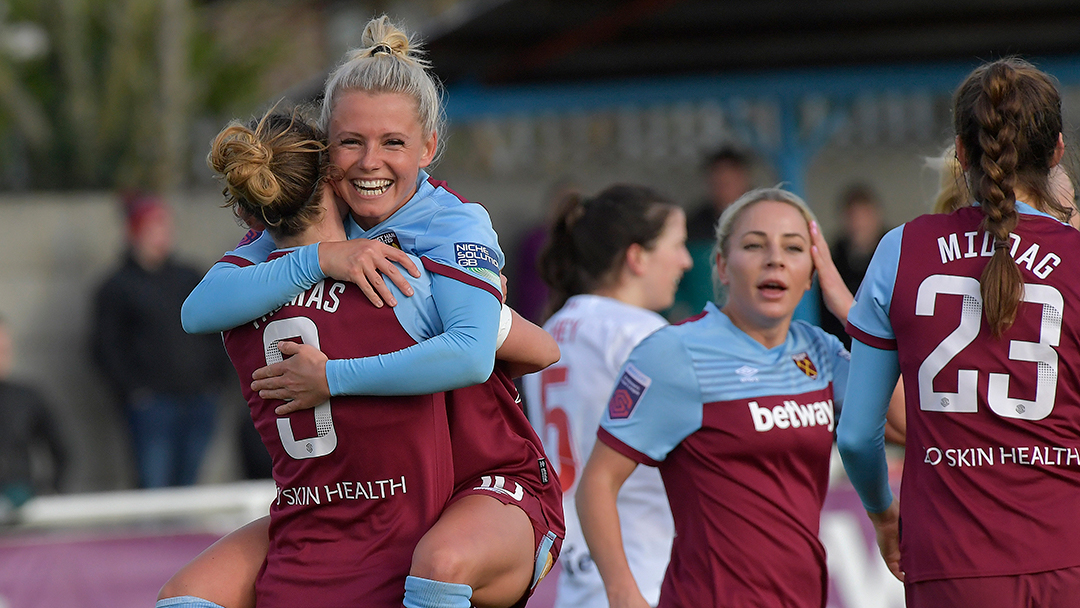 Matt Beard celebrated 50 competitive matches in charge of West Ham United in style with a ruthless performance against former side Liverpool.

A goal either side of half-time from both Adriana Leon and Martha Thomas were just reward for a display of tenacity and fine finishing on a chilly Sunday afternoon at Rush Green.

The Hammers grew into the game as the contest went on and proved full value for their dominant scoreline, despite Rachel Furness scoring twice late for Liverpool.

Looking to get back to winning ways in the Barclays FA Women's Super League, manager Matt Beard made four changes to his starting eleven, moving defender and recent England selection Grace Fisk to right-back.

In came Katharina Baunach at left-back, with Julia Simic, Kenza Dali and Adriana Leon reintroduced to the side in lieu of Jacynta Galabadaraachchi, Leanne Kiernan and the suspended Kate Longhurst.

With both teams struggling for form in recent weeks, and the brisk and occasionally blustery weather at Rush Green Stadium influencing the ball’s course, it was perhaps unsurprising the teams struggled to settle into much of an early rhythm in possession.

What half-chances they had were borne of loose touches as both teams pressed high, Leon’s curling ball in causing the visiting defence some consternation after a quarter of the game played

Moments later, the breakthrough arrived with the Hammers’ first shot of the match, Leon collecting Simic’s through-ball on the outside, squaring up her defender and drilling a low strike into the bottom corner from the edge of the area.

West Ham’s tails were up and they had a second duly inside a minute. Alisha Lehmann collected the ball on the wing, bursting past the covering defender and delivered an accurate low ball which Thomas gleefully side-footed in from the six-yard line.

Leon had the chance to grab her second – and the Hammers’ third – two minutes later, taking Dali’s audaciously lofted ball on the bounce and trying to lob Preuss in the Liverpool goal, but not quite finding enough height on this occasion.

Although shooting chances were proving scarce, they were also presentable when they did arrive; Dali’s skilful run from midfield saw her feed Lehmann and when the Swiss international’s cross was headed out to the edge of the area, Simic had time to meet it with a sweet half-volley which flashed just wide of the post.

Liverpool’s best effort of the half was a speculative one, Niamh Charles with an angled drive at Anna Moorhouse’s near post which the West Ham keeper gathered at the second attempt.

Five minutes into the second half, and another individual piece of skill yielded Thomas’ second, flicking Dali’s pass through her legs. Having bought half a yard at the edge of the area, the No9 arrowed a superb low strike across the goalkeeper’s reach, nestling inside the side-netting.

Moorhouse was then forced into a good low save with her legs to stop a cross-shot, moments before Thomas made a clean connection with Baunach’s in-swinging corner kick, heading the ball down into the turf – but unfortunately it bounced over the bar.

On the hour mark, Thomas turned provider, beating Robe on the right and crossing low to the near post, where Leon steamed in to poach from close range.

Liverpool found themselves on the scoresheet inside the final 20 minutes when Rachel Furness capitalised on a spilled free-kick to turn home.

Lehmann's direct running almost saw her claim a deserved goal as the game ticked towards its closing minutes, her stinging effort palmed away by Preuss.

The away team got their second from a set piece when Furness provided a bullet header from a corner, but for Beard and West Ham, there were no shortage of positives to take away from a high-quality's day's work in the top flight.