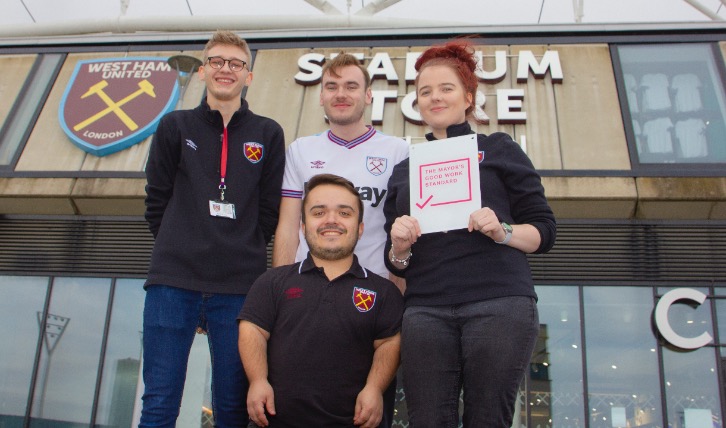 West Ham United is proud to announce that the Club has achieved the Mayor of London’s Good Work Standard, becoming the first Premier League team to be awarded the status.

The Standard is awarded in recognition of the Club’s commitment to its staff and reflecting the many ways in which West Ham United is aiming for the highest possible working conditions.

The Club is delighted to be the first Premier League side to become a Good Work Standard employer, which was officially launched in the summer of 2019 as part of the Mayor of London’s commitment to making the capital the best city in the world to work.

West Ham United Vice-Chairman Karren Brady said: “Achieving the Mayor’s Good Work Standard is fantastic recognition for the hard work the Club has put in to make sure our policies and practices go the extra mile for staff, who are our most valuable asset. Rewarding and retaining them is critically important.

“The Club is a fully accredited London Living Wage employer, is leading the way on gender pay and has a range of family friendly policies to help make this a great place to work. This wider programme of activity is focused on developing all our people, so that we can promote from within and maintain a culture whereby everyone working at West Ham has opportunities to succeed and drive their own careers.”

Achieving the Mayor’s Good Work Standard is fantastic recognition for the hard work the Club has put in to make sure our policies and practices go the extra mile for staff, who are our most valuable asset.

The Mayor’s Good Work Standard sets the benchmark for the best employment standards and helps employers contribute to a fairer and more inclusive London economy. This means the economy works for all Londoners and more Londoners can access good jobs, in workplaces that support their health and wellbeing.

To make this happen, the Mayor is working with businesses that celebrate excellent work practices and assist businesses in adopting best practice approaches by bringing together a range of support and resources.

“I hope London’s other professional football clubs will follow West Ham’s example and show they too are committed to the highest employment standards for all of their staff.”