Laura Vetterlein believes West Ham United must fix the small issues as soon as possible in order to return to winning ways in the Barclays FA Women's Super League.

The Irons were defeated 2-0 by Reading in their last match and have since began preparations for this weekend’s match with Liverpool, with the German keen to help her side start earning victories again.

To do that, according to the defender, the side just needs to make some minor adjustments in their decision-making to complement the team’s drive and work-rate.

It’s little things that are costing us the points. We have to try to fix that as quick as possible so we can win our next few games

“We don’t necessarily have that answer to what’s been not going right,” Vetterlein told whufc.com. “I think we’ve always shown character and the desire to fight, so I don’t think our work ethic has been a problem.

“It’s more about the little details. They aren’t clicking for us at the moment. Sometimes we’ll make it to the final third but make the wrong decision. It’s little things that are costing us the points. We have to try to fix that as quickly as possible so we can win our next few games.”

A goal in each half condemned the Irons to the loss at Adams Park in the week, with Vetterlein particularly frustrated with how the side failed to bounce back from their previous defeat to Chelsea.

With a few days off prior to returning to training for the Liverpool match, the centre-back is optimistic everyone will return fully prepared to put right recent wrongs. 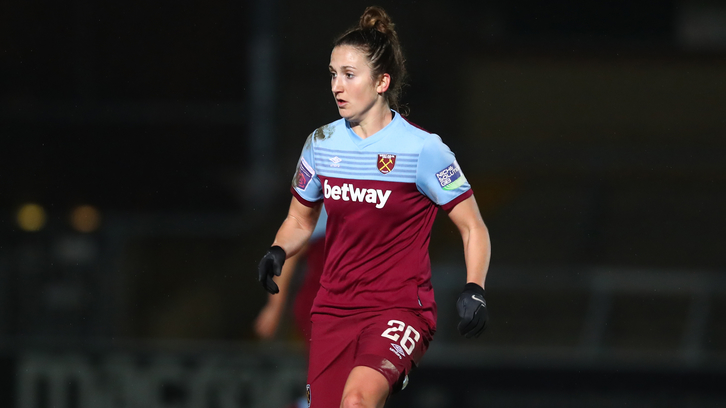 She continued: “We are really disappointed with the Reading result. We wanted to come to Reading to show a reaction after the Chelsea, but unfortunately it didn’t work out like we planned. We left Adams Park without points which was really frustrating.

“We’re having a few days off so we’re all going home, or at least I am! I’ll try to refresh and get myself into a good mindset before the next challenge that we have coming. We have a big game against Liverpool next, so I’ll be using these days to refresh and come back with a strong mentality.”

With the Reds visiting Rush Green Stadium on Sunday, Vetterlein is anticipating an incredible atmosphere at the home of West Ham United women’s team as they take on a Liverpool side which is battling against the drop.

“It’s a really big game and such an important one for us,” she added. “It’s good to have it at home with the fans behind us, supporting us, and pushing us as they always do. We’ve got to show a good reaction.

“We really want to win this game and I think, if we stay together, and with the fans behind us, we will have a good performance.”