Hammers handed defeat away at Reading 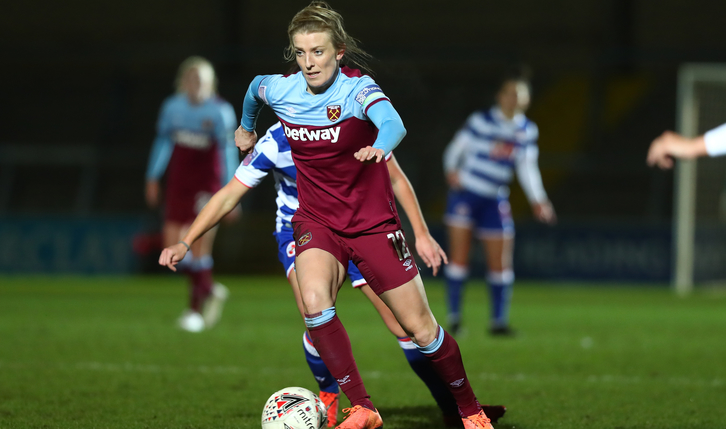 Goals in each half saw West Ham United fall to a 2-0 away defeat against Reading.

Jade Moore’s close-range header in the first period was followed up by Brooke Chaplen’s breakaway strike in the second in a disappointing outing for the Irons.

West Ham struggled to create clear-cut chances against the Royals, with Alisha Lehmann going close with a first-half headed effort.

A cold February evening at Adams Park played host to Wednesday's game; a ground with great memories for West Ham after an FA Cup semi-final win at the home of Reading last campaign.

With Lehmann, Leanne Kiernan and Jacynta Galabadaarachchi all supporting a returning Martha Thomas up front, there was bags of pace for the Irons to try and exploit Reading’s defence with; as became apparent after just five minutes when Tessel Middag found Galabadaarachchi in space.

A lovely counter-attack not long after, led by Kate Longhurst’s driving dribble, saw the ball crossed in by Cecilie Redisch Kvamme. Lehmann did well to get her head onto the deep effort, but it was blocked away.

Goalkeeper Anna Moorhouse earned a much deserved applause from the West Ham fans in attendance when she quickly got down to deny Brooke Chaplen from close-range, but the shot-stopper could do little to deny the game’s opener just over half-way through the first period.

A set-piece was headed back into the danger area by Amalie Eikeland, with Moore reacting quickest to head the ball home.

Eikeland herself would hit the post with a volleyed effort, after Moore tried to return the favour with a cross of her own.

The introduction of Kenza Dali at half-time, in at the No10 role, added more attacking impetus to the Hammers front-line, with the French international looking to find the runners in behind.

As West Ham pressed, however, a gut punch came in the form of a second for Reading. A long clearance forward was chased down by Chaplen. Despite Fisk’s best efforts, the Royals attacker got past the defender to slot into the bottom corner.

Matt Beard followed up with the introductions of Julia Simic and Ruesha Littlejohn, but the away side found it tricky to break down a resistant Reading back-line, leaving Adams Park without a share of the points.