Scholars, staff and special guests came together at the Academy of Football to celebrate the full debut of West Ham United starlet Jeremy Ngakia.

The 19-year-old enjoyed an evening he will never forget on Wednesday 29 January, his professional debut coming in the Premier League fixture against Liverpool at a packed-out 60,000-strong London Stadium.

Having started his first league fixture for the Club, Ngakia’s name was unveiled as the latest addition to the Academy of Football ‘graduates board’ at Chadwell Heath Training Ground as part of a short celebratory ceremony.

I’d like to thank literally everyone, because everyone has made a contribution to where I am today – the players, my family, the staff, the fans

Ngakia was joined by his family, U23s and U18s teammates and coaches, Academy staff and special Guest of Honour, West Ham United Joint-Chairman David Gold, who presented him with his shirt from the game, specially embroidered to encapsulate the achievement.

“Mark Noble told me afterwards ‘Never forget this moment. You’ve made your Premier League debut against Liverpool. Not many players can say that. Cherish this moment.’

“I remember, when they first opened this training ground, all these names were on here. I said to myself ‘you need to try and get there, and now I feel the hard work’s paid off.

“I’d like to thank literally everyone, because everyone has made a contribution to where I am today – the players, my family, the staff, the fans. I’m grateful for everything.”

Joint-Chairman Gold added: “It’s a fabulous day. This Club is famous for its Academy - it’s the very root, the lifeblood, of our football club.

“Here we are adding another name to the graduates board. You can see we had Declan [Rice’s full debut] in 2017, Grady [Diangana] in 2018, and Ben Johnson in 2019, so every year somebody is getting on this list.

“As fans, we feel it’s part of us, that they are closer to us because they have come through this great Academy. It keeps that spirit going alongside those great names of the past.” 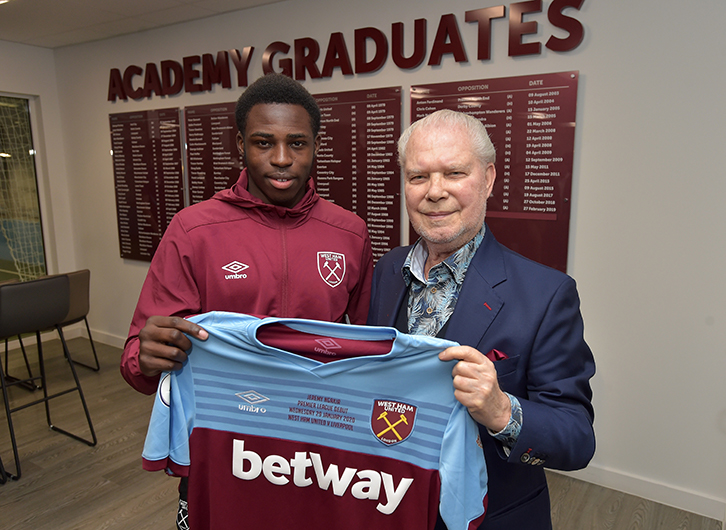 Ngakia’s impressive debut against the Premier League leaders was just another landmark in a memorable campaign for the 19-year-old.

The London-born full-back began the season with Dmitri Halajko’s U23s side, starting their first two league games before suffering an injury which ruled him out until early December.

Typically focused and driven upon his return, Ngakia continued to be involved in first-team training sessions, sufficiently impressing manager David Moyes to be named in a West Ham United matchday squad for the first time in his fledgling career, against Sheffield United.

A Premier League debut less than three weeks later was of little surprise, therefore, to Halajko and fellow Academy coach Paul Konchesky, who has witnessed Ngakia’s rise through the age groups at Chadwell.

“It’s a proud moment for him and everybody at the Academy,” Halajko noted. “In terms of senior football it was Jeremy’s first game at this level, and what a game to have it in.

“He’ll want to build on that. He’ll want to turn that one appearance into five, then into ten, and go from there.

“He’s still only 19 so he’s got plenty of time to do so, and one thing’s for sure: he’ll work really, really hard to improve himself.”

Konchesky added: “Every game Jeremy plays, he’s so relaxed. He takes a lot of advice on from whoever he speaks to.

“He’s a good kid who takes things on board. He’s done well to get here, and whatever’s got him here he needs to keep doing and improving.

“I know the boy really well and I know he will improve, he will work harder. He’ll be ready for whenever he’s counted upon again.”