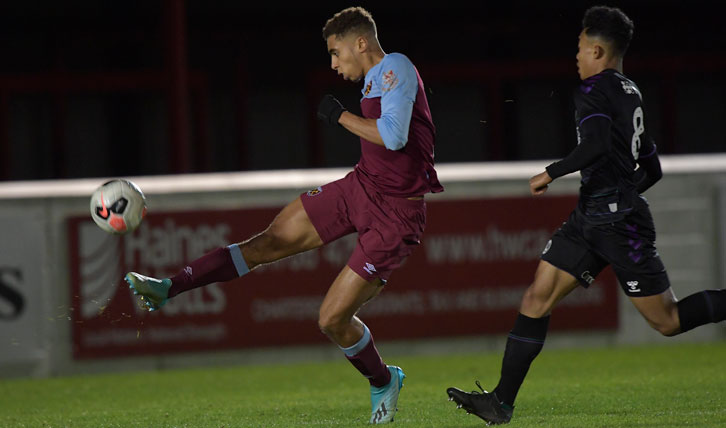 West Ham United continue to ride high in the U18 Premier League South this season as one of three sides still in the running for the title.

Described by Keen as an ‘unsung hero’ at the core of the young Hammers’ form, 17-year-old Will Greenidge started all three games and has been an ever-present this season.

It’s good to show that I can keep my standards high, week-in, week-out, and perform to a level that helps the team in whatever way I can

“That win against Chelsea has to be my stand-out moment,” Greenidge said. “To give them their first defeat of the season in the league was incredible.

“It was the first time a lot of us players have beaten a Chelsea side. The way the team performed and stuck together throughout the whole game, putting everything on the line, was really special.”

With 18 appearances under his belt –  the most of any player in the squad – Greenidge has also begun the step up to the next level, appearing for the U21s in their 5-4 win at League Two side Newport County in the EFL Trophy in September.

The full-back has blended eye-catching performances with dependability and leadership on the pitch, making up for the lost time during two injury-hit seasons. The teenager looks to have put those setbacks behind him and is pleased to be showing his reliability this campaign.

“The last two seasons I’ve picked up knocks that have kept me out for long periods, but this year I feel really strong – and, even better, I feel back to my best.”

The U18s go into the final stages of the season sitting third in the table, having lost just two of their 15 league matches, and are just two points behind leaders Fulham and second-place Chelsea.

With seven games to play and the title still within their grasp, Greenidge has been pleased with how the league campaign has shaped up thus far, and wants it to end on a high.

“The season has been a really strong one so far both for me personally and for the team," he continued. "We’ve had some great results along the way and shown that we can play some top-quality football, while also showing grit and determination to get results when we need to.

“I think being near the top of the league is a fair reward for the work the we’ve put in so far. Everyone around the team is pleased, but now we just want to keep pushing on to finish as high up the league table as we can.”

“Personally, my goal for the rest of the year is to be involved with the U23s as often as I can. Along the way, I want to help the U18s to keep pushing on to hopefully top of the table.”

West Ham United's scholars return to U18 Premier League South action at home to Tottenham Hotspur on Saturday 22 February. Kick-off at Little Heath is at 11am, with admission and parking both free of charge.