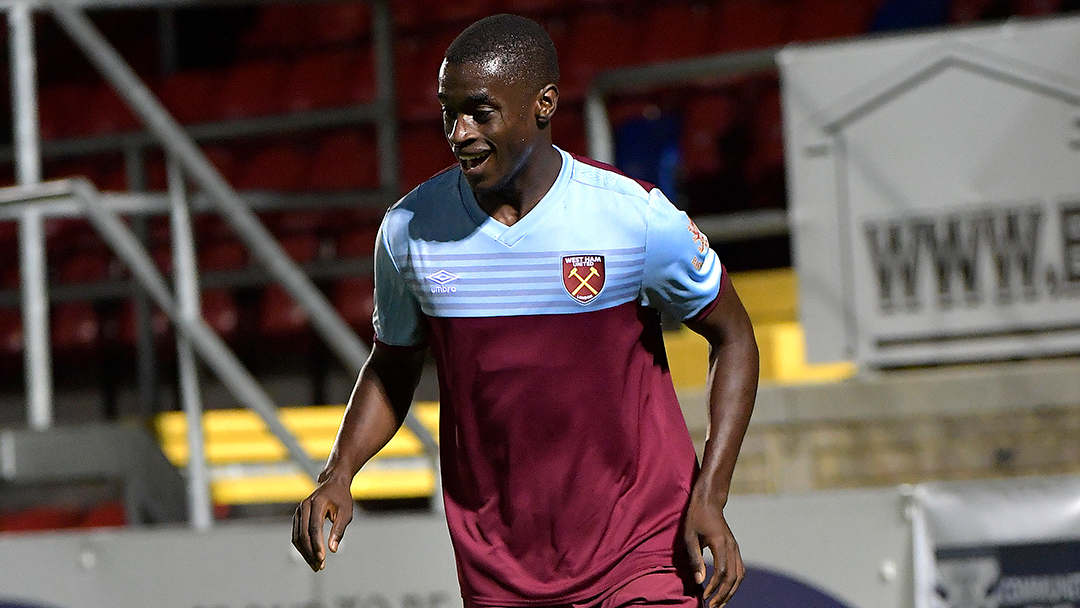 It seemed a brave decision, at first, to shoot first-time – but West Ham United U23s forward Mesaque Dju knew what he was doing.

Receiving an Oladapo Afolayan pass across the opposition area, the Portuguese forward knew the urgency of the situation; 2-1 down with ten minutes to go against Sunderland, and three points required to leapfrog Manchester United at the top of Premier League 2 Division 2.

Opening his body up to side-foot goalwards, the 20-year-old brilliantly guided the ball into the top-right corner – but he wasn’t content to stop there.

“My goal was a very good one, I think,” Dju recalled afterwards.

“It was all about the team. We worked together to create the goal, and when Dapo [Afolayan] passed me the ball, I thought about controlling it, but we were losing 2-1, so I decided it’d be best to shoot.

“When the ball went in, I said to all my teammates: ‘We need more here. We need the win. We need the three points’ - and we got them. Everyone was happy, and now we need to keep working hard because the best moments for us are still to come.”

With only six games of the league campaign remaining, and a two-point advantage at the table summit to maintain, the Hammers committed bodies forward as they went all-out for a winner on Wearside on Sunday afternoon.

We need to finish every game with this feeling, keep improving and working hard for the Club and for ourselves

Dju’s return off the bench, following a near six-month lay-off, saw his excellent equaliser matched by Xande Silva’s low strike from range – his compatriot also making his return from long-term injury – and a Sean Adarkwa poached effort, all inside four minutes.

Having not played in Claret and Blue since leaving the field against Reading U23s in late August, ‘Mesa’ – as he is popularly referred to in the dressing room – was delighted his team’s late offensive paid dividends.

“It’s about the week before,” Dju explained. “We’d trained very hard for that kind of moment, and the team did it very well. Now we need to keep working for more.

“I saw everyone happy in the changing room afterwards. We need to finish every game with this feeling, keep improving and working hard for the Club and for ourselves.”

Capped by Portugal at every stage between U16 and U20 levels, Dju signed for West Ham United from Benfica in January 2019, making six Premier League 2 appearances last campaign.

He featured from the bench in the young Hammers’ first three matches this campaign, only to sustain injury against Reading – an affliction that Dju is pleased to have shaken off.

Having made such an impact on Sunday afternoon, Hammers supporters will look forward to seeing what Dju can achieve for the remainder of the campaign and beyond.