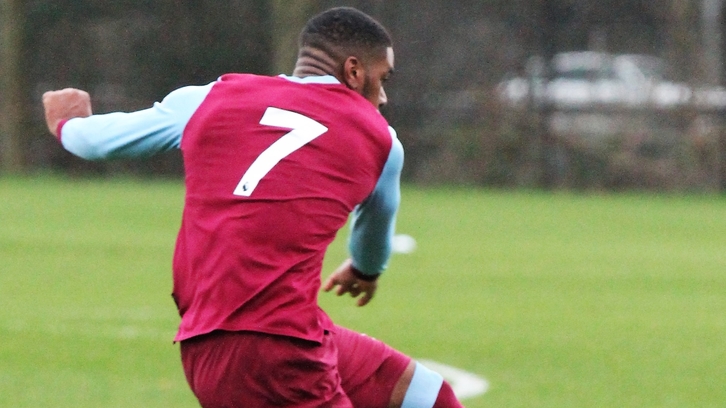 West Ham U18s continued their fantastic start to 2020 with an emphatic 5-1 win over Arsenal U18s at Shenley Training Centre on Saturday morning.

Goals from Sebastian Nebyla and Kamarai Swyer, and a brace from Mipo Odubeko, had put the Hammers well in control before a late Zane Monlouis own goal completed the scoring.

The win keeps Kevin Keen’s side in third in U18 Premier League South, just two points behind pace-setters Chelsea and Fulham.

The U18s are now unbeaten in their last eight league games and, after hitting five, have now scored the second-most goals in the division behind Fulham.

West Ham took the lead in the 28th minute through Nebyla. A razor-sharp counter-attack saw Jayden Fevrier released down the right-hand side and the No7 managed to cut the ball back inside to Nebyla who fired home for his tenth league goal of the season.

The hosts, however, equalised shortly before half-time after they were awarded a penalty.
Arsenal midfielder Alfie Matthews stepped up and made no mistake from 12 yards to send the teams in level at the break.

Just five minutes after the restart the Irons were ahead once more, Fevrier’s whipped front-post corner finding the advancing Swyer. The winger was able to apply the finish past Graczyk in the Arsenal goal.

The U18s extended their advantage not long after, a miscommunication amongst the Arsenal backline leaving Odubeko one-on-one with Gracyk. The striker finished calmly under the keeper for his fifth of the campaign to put West Ham 3-1 up.

The 17-year old didn’t have to wait long to add his sixth. In the 64th minute Odubeko raced to intercept a sloppy Arsenal pass on the halfway line and drove towards the heart of the Gunners defence.

The forward evaded two challenges on his way to the edge of the box and curled the ball immaculately into the top right corner to put the result beyond doubt.

The Hammers added a fifth in injury-time when Keenan Appiah-Forson’s first-time effort cannoned in off Arsenal defender Monlouis and into the Arsenal goal, sealing a comprehensive victory for Kevin Keen’s side.