Declan Rice: The fans’ support is massive for us

“All the players know the position we are in in the table, and it’s not ideal. We’re not happy about that ourselves, let me tell you.

“But it’s massive for us that the fans stick behind us and keep believing in us and keep supporting us, which I know they will do because, in my opinion, they’re the best set of fans in the league to be honest.”

The 21-year-old refuses to take for granted the affection the Claret and Blue Army have shown him on his apparent fast-track from fresh-faced Academy graduate to Premier League pearl.

And although he has only been with the Club a relatively tender seven years, having joined the Academy of Football aged 14, it is such a strong bond which makes him more determined than ever to empower the Irons to rediscover their form this season.

West Ham are a massive club, and the situation we are in isn’t good enough. We are going to make it positive again

“West Ham are a massive club, and the situation we are in isn’t good enough, so the fans are letting their feelings be told,” he told West Ham TV.

“We are going to make it positive again, and hopefully start that off with Saturday, Brighton at home, and get those massive three points on the board.” 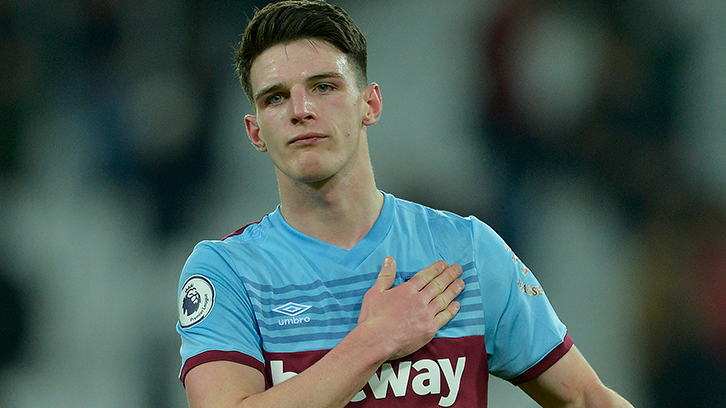 Rice’s confidence is buoyed by the arrival of fellow midfielder Tomáš Souček, whom he shared a pitch with when England took on Czech Republic in a Euro 2020 qualifier in Prague.

His pride in the Club, meanwhile, is further invigorated by the recent first-team involvement of fellow Academy graduate Jeremy Ngakia, who made his full West Ham United debut against Premier League leaders Liverpool on Wednesday evening.

“I remember playing against him [Souček] for England,” he recalled. “We were identifying them before the game, and he was probably their best player that we were talking about quite a lot.

“He’s tall, athletic, really strong, good on the ball, can get forward, and is good defensively as well. It’s nice to have another midfielder in now, so we can all play and rotate and have good competition as well.

“It’s massive for Jez. He’s such a good lad, so humble, always smiling around the place. Before the [Liverpool] game he didn’t even look nervous at all, he was just smiling.

“It wasn’t going to be easy for him but I think he handled it really well. I’m buzzing for him. The future is bright for Jeremy for sure.”

The influence of manager David Moyes, who returned to the Club at the turn of the year, has been another plus point for Rice, who established himself as a first-team regular under the Glaswegian during his first spell in charge.

“His work ethic is really good," Rice declared. "He wants the best for all of the players, and you can see a smile on all their faces again. We want to go out on the pitch and give 100 per cent for him and 100 per cent for the fans.

“We’ve had a tough couple of games recently. There are definitely improvements and obviously he’s come in at a hard time in the season but I’m sure that he’ll get things right.”

Although the Liverpool game ultimately ended in defeat on the night – the Reds’ more clinical finishing ultimately proved the difference between the two sides – Rice is determined to mine the positives from their performance and put them to good effect on Saturday.

“We created four or five clear cut chances against probably the best team in the world at the moment,” he noted. “Now, it’s about taking those chances and putting them in the back of the net when it counts.

"That's the minimum; we gave 100 per cent. I think in the first half, other than the penalty, we did that. In the second half as well, we limited them only a few chances.

"There’s a lot of positives to take and now obviously we’ve got to take that into the game on Saturday against Brighton.”

For Rice and his West Ham United teammates, the race to renaissance is on.