During a year of disruption and distress, it was important to keep morale high, focus on positives and highlight accomplishments.

As such, the West Ham United Foundation pressed ahead with their annual celebration event - albeit virtually due to the COVID-19 pandemic - recognising the achievements of the organisation and its workforce.

The internal event, which is also delivered by a small team of the Foundation’s staff, was hosted by CEO Joseph Lyons and included a number of special guests from the Club and its community, who helped to present staff awards and shine a light on some of the fantastic community work which has occurred across this calendar year.

Kicking off the evening was a surprise appearance from the men’s first-team manager, David Moyes, who offered his congratulations on the Club’s (just announced) Sports Business Award win and efforts across an unprecedented year, saying: “Football clubs have such an important part to play in the community and I can only see that West Ham are doing a great job, especially with helping to tackle poverty and loneliness. I certainly recognise all the work that the Club are doing.

“Congratulations to the Club [on the award] - it’s a brilliant achievement because the work that football clubs are doing in the communities is so impressive, so that tells me the exceptional level the Club is at that. Great credit to everyone.” 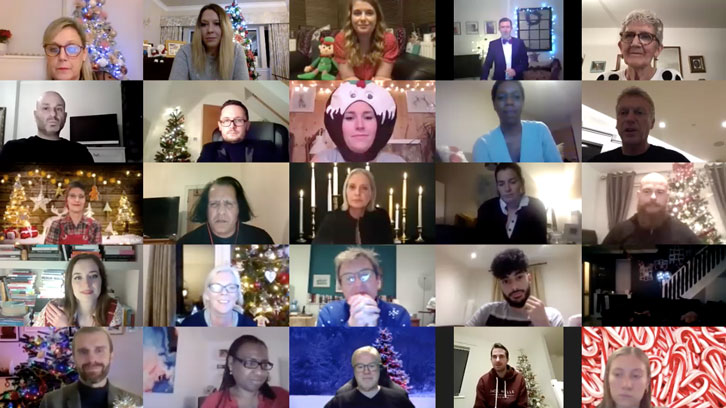 Over the past ten months, the Foundation’s delivery has constantly adapted to meet the needs of the local community while adhering to government’s guidelines. Although in some cases face-to-face programmes have been able to continue, such as, mentoring, youth interventions and school sessions, new virtual methods were developed for others. This resulted in a range of online activity, from Holiday Hammers, to workshops for schoolchildren, to Players’ Project appearances.

Furthermore, wellbeing calls, volunteering and donations to frontline services have consistently been taking place, and, when programmes were able to return to action in person (with the latest safety protocols in place), participants - from the young to the elderly - did so with enhanced appreciation and motivation.

The Foundation’s resilience and achievements in 2020 wouldn’t have been possible without the ongoing support from the Board, management and players, guidance from its Trustees, and crucially the disposition, determination and commitment of its dedicated team.

While acknowledging the difference West Ham United has been making across the community and celebrating all of the Foundation’s workforce, special guests also announced winners of awards as nominated by staff - giving peer recognition and appreciation for their contributions.

Below are the winners of each category – voted by staff:

The last award of the night was the Trustees’ Award, with the winner chosen by the Foundation’s seven Trustees, and this year Health Manager Maria Abraham received the honour.

Since March, Maria has volunteered over 300 hours to the Newham Foodbank, as well as remaining dedicated to her work with the Foundation, adapting her programmes, which include Any Old Irons, 150Club and a variety of other projects; remaining proactive in providing participants and partners with help and care during this difficult year and being a leader and team player across the organisation.

Closing the event, Lyons gave a message of thanks and encouragement for the future, stating: “You can’t underestimate what you do and the impact it has. I often reflect on this and say look I do know the privileged position we have under a West Ham umbrella to do this work in our community and continue to do it.

"The work we have all put so much effort into over the past six, seven, eight years has enabled us to do things like survive the pandemic as an organisation, to be able to repurpose, to be able to really focus on themes and areas of work that are so important to our communities and actually gives us a trajectory for the next three to five to ten years that is even now going to grow on what we’ve already done.