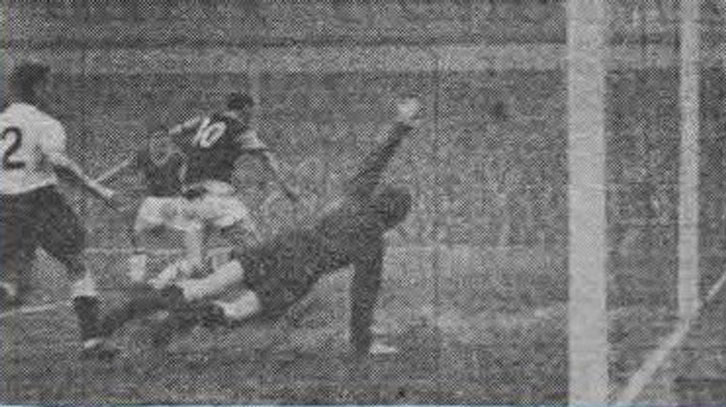 It is 62 years since West Ham United last played a competitive match on Christmas Day, and the likelihood is they never will again.

Tottenham Hotspur were the final visitors to the Boleyn Ground on 25 December 1958, when the newly-promoted Hammers ran out 2-1 winners in a First Division fixture.

Goalkeeper Ernie Gregory, then 36 and in the twilight of his long and illustrious career between the sticks, was West Ham’s first-half hero, keeping the game goalless with a fine save from Bobby Smith.

Into the second period and it took just two minutes for Phil Woosnam to create the hosts’ opening goal, beating three Spurs defenders before firing in a shot which Johnny Hollowbread could not handle, allowing John Dick to slam home the loose ball.

With winger Woosnam in irresistible form on the left, West Ham doubled their lead when the Welshman found Dick, who supplied a through ball for strike partner Vic Keeble to score.

Woosnam was then injured by a challenge from Tottenham defender Maurice Norman and the home side were effectively reduced to ten men, as these were the days before substitutes.

Spurs pulled one back when Smith got away from Ken Brown and netted with 17 minutes remaining, but Ted Fenton’s team held on for a deserved victory.

He would not have known it at the time, but Alfred Earl (pictured) embarked on an unwanted record run when he made his debut for West Ham United on Christmas Day 1925.

The south London-born right-back played a total of 206 first-team matches without scoring a single goal for the Hammers.

No player has featured in so many senior games without hitting the back of the net!

Earl did enjoy plenty of highlights in a Claret and Blue shirt, though. His debut ended in a 5-2 First Division win over Aston Villa at the Boleyn Ground – a game in which his near-namesake Stan Earle (pictured) netted a hat-trick.

The last player to net a Christmas Day hat-trick for West Ham was the late Terry Woodgate, who scored all his team’s goals in a 3-1 First Division victory over Leeds United at the Boleyn Ground in 1950.

A left winger, Woodgate (pictured) was born in East Ham and played amateur football for Beckton before joining the Hammers at the age of 19 in 1939.

After guesting for a number of clubs during the war, including West Ham, Woodgate returned to full-time football in 1946, and went on to score 52 goals in 275 competitive appearances – including his only competitive hat-trick on 25 December 67 years ago!

Of the 961 players to have featured in a first-team match for West Ham United, not a single one was born on Christmas Day.

Before the tradition ended in 1958, the Hammers would play at home almost every year on Christmas morning, with matches kicking-off at 11am to enable fans to support their team before heading home to spend the afternoon and evening with their families.

With the vast majority of Christmas Day fixtures being played at the Boleyn Ground, it is not surprising that West Ham had an enviable record when it came to playing on 25 December.

Of the 45 matches the Club contested between 1899 and 1958, including Southern League, War-Time and Football League games, the Hammers won 25, drew 12 and lost just eight, with just five of those defeats coming on home turf.