West Ham United is pleased to announce that Michail Antonio has extended his stay with the Club until the summer of 2023.

The news completes an outstanding year for the No30, who has scored 12 goals in 23 appearances, played a starring role in helping keep the Hammers up by scoring eight goals in July, earning him the Premier League’s Player of the Month award.

The 30-year-old ranks fourth in the Club’s all-time Premier League goalscoring list with 39, has netted more goals for the Irons than anyone else since he arrived in 2015 with 41, was voted Hammer of the Year in 2017 and has become a firm fans’ favourite.

I got eight goals in one month, so I’ve got two-and-half years now to see how many more I can get and how far I can get!

“I got eight goals in one month, so I’ve got two-and-half years now to see how many more I can get and how far I can get!” he told West Ham TV. “I definitely want to get to the 50-goal mark in the Premier League and see how I can go on from there.

“I’ve been here for five-and-a-half years, this season will be six and by the time my contract expires it will be eight years. Before I signed here, the longest I had been at a club was two years, so it shows that I’ve been here, done my work, been able to secure my position and keep growing as a player.” 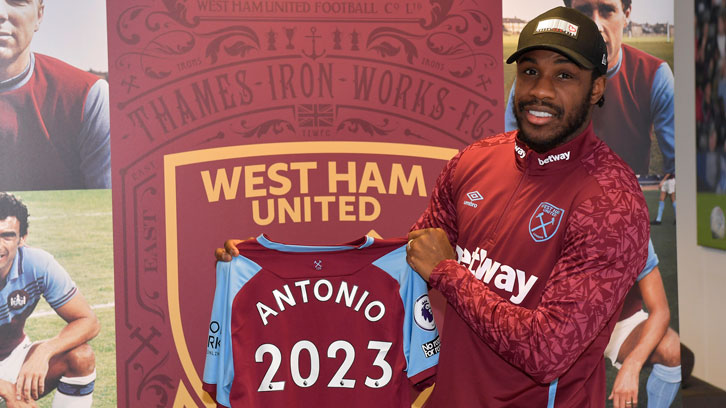 Born in Wandsworth in south London, Antonio started his career with non-league Tooting and Mitcham before working his way up through the divisions with Reading, Southampton, Sheffield Wednesday and Nottingham Forest.

An EFL Trophy final winner and goalscorer with the Saints in 2010, the versatile Antonio has played in a variety of positions since signing for West Ham in September 2015, coming into his own since David Moyes moved him into a centre-forward role last season.

Even before that, however, Antonio’s all-round contribution and knack of scoring important goals had made him a favourite among the Claret and Blue Army. 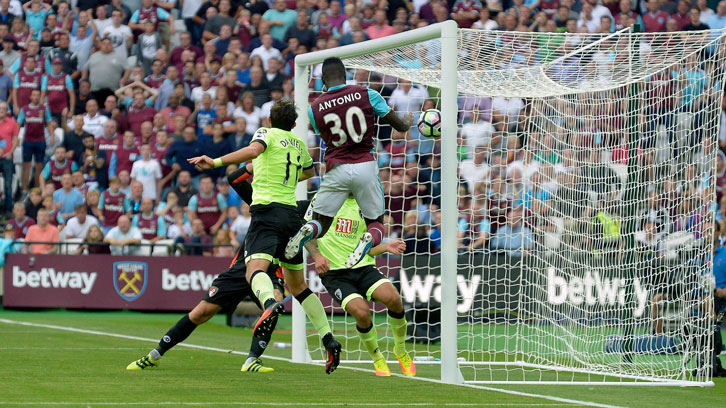 In 2015/16, he netted in unforgettable wins over Southampton, Liverpool, Tottenham Hotspur and Manchester United at the Boleyn Ground. In 2016/17, he scored the winner in the first-ever Premier League match at London Stadium against AFC Bournemouth, was called-up by England for the first time and went on to cap a superb season by being voted Hammer of the Year and signing a new long-term contract.

In 2018/19, he wrote his name into West Ham folklore again by becoming the first visiting player to score a winning goal at Tottenham Hotspur’s new stadium. And, last but by no means least, in summer 2020 he scored eight goals in six Premier League matches following the restart, including a record all four in a 4-0 win at Norwich City, to help the Hammers secure safety and himself win the Player of the Month award.

Everyone at West Ham United would like to congratulate Michail on extending his stay with the Club and wish him well for his future career in Claret and Blue.