Dmitri Halajko: There were lots of positives in our performance 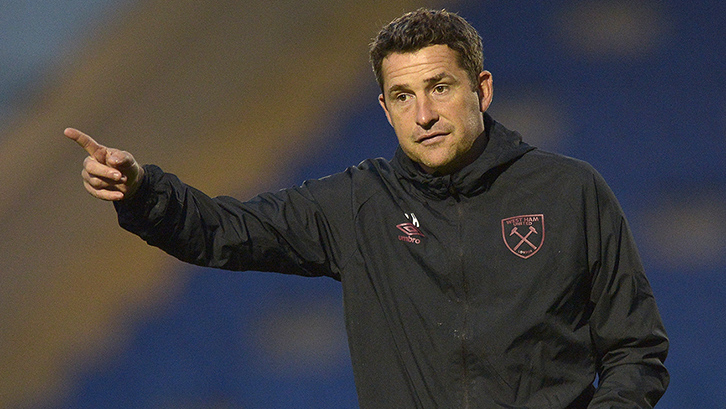 West Ham United Under-23s lead coach Dmitri Halajko was pleased with his side’s dominance, despite their 2-1 defeat at Everton on Monday night.

The Hammers can consider themselves hugely unfortunate to have left the Pure Stadium without at least a point, having created sufficient opportunities to even claim a significant victory.

Despite enjoying the better chances inside the opening 20 minutes, individual errors proved costly in allowing the Toffees to establish a 2-0 lead.

West Ham pulled one back shortly after when Keenan Forson slammed home from Kai Corbett’s lay-off inside the box, but despite dominating the ball and the flow of chances from thereon out, luck ultimately evaded the team in Claret and Blue.

Good saves from Everton’s goalkeeper, good shouts for penalty kicks and plenty of near-misses ensued, meaning that despite the loss, Halajko believes his young players can take plenty of positives away from their trip to Southport.

He explained: “I thought that we played really well, were the better team and dominated the game – especially in the second half.

“We’ve given away some sloppy goals again with individual mistakes, but we had a bit of a patched-up team tonight. We’ve got a lot of players who are injured and a few players that pulled out ill at the last minute, so we had to make a few changes with people playing out of position and that caught us a little bit early on.

“Apart from that, I thought we dominated the game and was really pleased with a lot of individual performances. There were lots of positives and if we continue to play like that, we’ll progress and do well.”

Such was their dominance of the match, were it not for that opening spell, the Hammers would almost certainly have departed the North-West with a second Premier League 2 win of the season.

That’s the next level for us: to get that consistency where from minute one to minute 90, we don't make one mistake... apart from that, we've dominated the ball, dominated the game, and created the better chances

Now, the challenge is to channel that performance into one of consistency and concentration, according to Halajko.

“That’s what we need to do,” he confirmed. “I think even in the first 20 minutes, it was individual errors that cost us, rather than them being on top of us and being better than us.

“For me, it’s more about keeping concentration for 90 minutes and, as an individual, being able to go through a whole game being 100 per cent clean, with no mistakes, sloppy passes, missed headers – whatever it is.

“That’s the next level for us: to get that consistency where from minute one to minute 90, we don’t make one mistake that maybe lets the opposition in.

Key to a lot of the good work were a midfield trio in Forson, Alfie Lewis – whose pulled off some audacious passes – and Ossama Ashley, who put in plenty of running on his return from a six-week injury lay-off.

“The whole midfield three were dominant,” the lead ccoach reflected.

“We spoke before the game about that being a key part of our game and we wanted that midfield three to dominate their midfield three. I thought they did that.

“It was also great to see Nath back again, flying down the wing. Last week [against Peterborough] was his bedding in, but tonight we saw him get back to what he’s about: beating people one-on-one, going down the outside, so a great performance from him as well.”

The U23s’ final game of 2020 will take against Manchester City on Monday 21 December. The match will kick-off at 1pm at the City Football Academy.