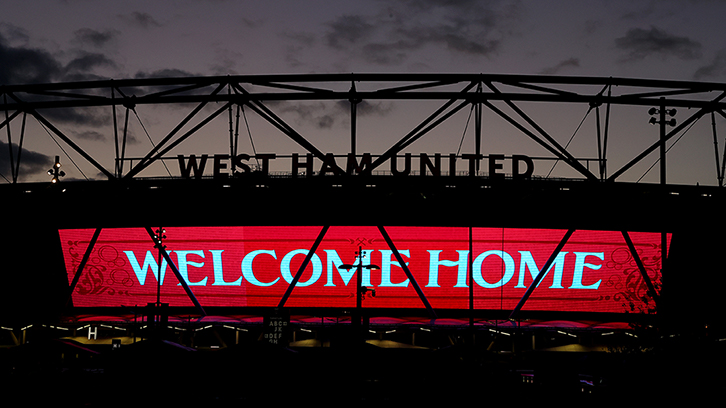 It’s time to be United again.

When exiting London Stadium 280 days ago, after a triumphant 3-1 win over Southampton, few supporters could have countenanced the fact that it would be their last visit to the venue in over nine months.

While so much has changed since then, West Ham United’s fanbase have remained unwavering in their support, and Saturday evening marked the first steps towards the day the Club can duly welcome them home in their customary droves.

The announcement at 4pm over the PA system was a truly historic one: London Stadium was officially open to supporters.

Back was the passionate buzz in and around the London Stadium as the minutes counted down towards a Premier League matchday.

Back were the vociferous roars of anticipation as the team line-ups were announced, and an even bigger roar when the match kicked off.

Back was a tremendous rendition of ‘Bubbles’, which was sung loud and proud – and brilliantly.

In those ways – and many, many more – although only 2,000 supporters could be present, it was an occasion on which to celebrate the West Ham family. 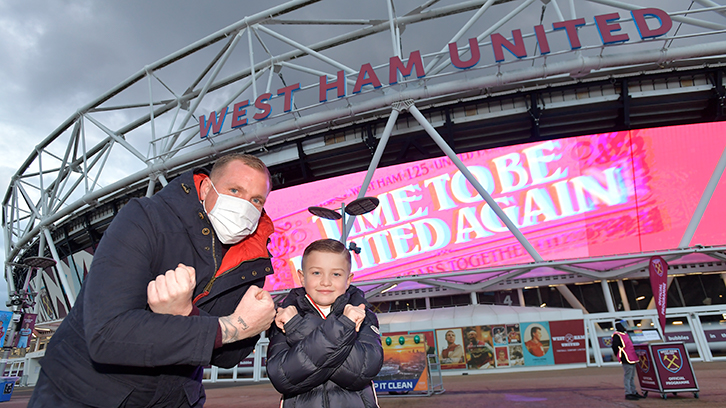 To welcome back Season Ticket Holders, the Board and everyone at the Club offered all in attendance a free hot drink at London Stadium.

The Club have worked in conjunction with all relevant stakeholders to put an efficient and effective plan in place, with the main aim of giving supporters a safe and enjoyable matchday experience at London Stadium.

Eager-eyed supporters were sat in the Billy Bonds Stand lower tier, as well as the West Stand, at London Stadium, and were entertained prior to the game - and at half-time - with a digital quiz through which a signed shirt was the main prize.

In line with SGSA guidance and to maximise the opportunity to see fans back at London Stadium, tickets were digital in nature and seats were appropriately socially distanced, even where supporters attended with someone from their household or support bubble.

Hand sanitiser was freely available, face coverings were worn by all, while signage abounded to provide all the information that the fans required.

Safety was, as always, the utmost priority, with fans attending in accordance with a Code of Conduct which they received prior to the game by email and which outlined the behaviours expected of them in and around the ground – a Code fulfilled by all in exemplary fashion. 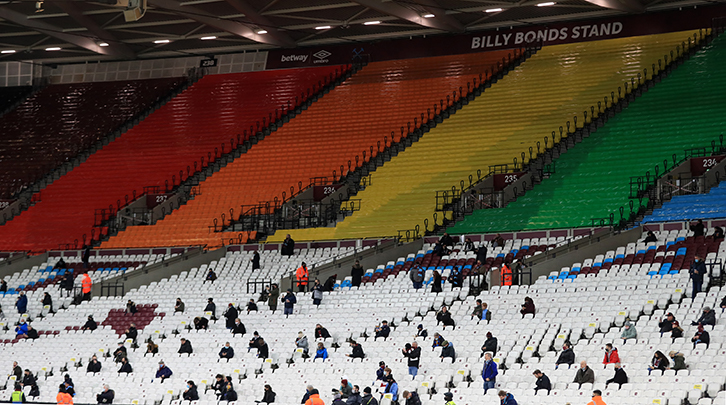 That celebration of the West Ham family also saw the upper tiers of the Billy Bonds Stand – as well as the front cover of the Official Matchday Programme – decorated in rainbow colours.

This was to express the Club's support for Stonewall's Rainbow Laces campaign, celebrating the impact that sport has on LGBT people, and the impact that LGBT people have on sport and considering how we can all play our part in recognising that.

That support was reflected in the signage and surroundings of the match, including rainbow ball plinths, handshake boards and substitutes’ boards, digital screens and LED perimeter boards.

There were also rainbow armbands for captains, rainbow laces and pin badges to let everyone present show their support.

It was a day when both West Ham United and Manchester United reiterated: sport is everyone’s game.

The celebration of fans continued in the pre-match proceedings as messages were displayed on the video screens from supporter groups around the world, and from the match’s young Virtual Mascots, bringing together the global West Ham family.

And tributes were also paid prior to out to our NHS and key worker heroes, without whose extraordinary efforts throughout the whole of the last nine months, it is unlikely the day would have transpired.

Come On You Urons – it’s great to have you back.