'Without doubt, that was my greatest game... ever!' - Robert Green on West Ham's historic win at Emirates Stadium

When West Ham United made the short but daunting trip to face Arsenal on 7 April 2007, it was in hope rather than expectation.

Back-to-back Premier League wins over Blackburn Rovers and Middlesbrough had given the Hammers hope of pulling off a miraculous escape from relegation, but they remained five points adrift of safety in 19th place.

To further stack the odds against them, West Ham were traveling to a venue, the recently opened Emirates Stadium, where their fourth-place hosts Arsenal had never lost! 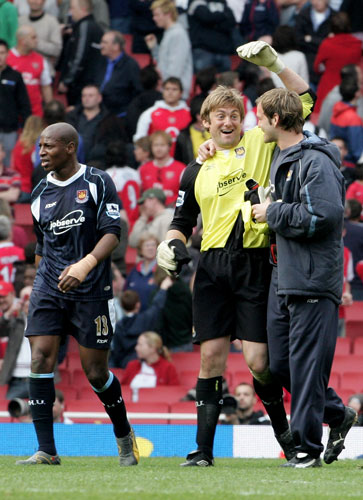 While Alan Curbishley’s players were increasingly confident, Arsene Wenger’s Gunners would surely prove too strong for a West Ham side who had only won once on their travels all season – albeit at Ewood Park in their previous away fixture.

Key to the Hammers’ chances, therefore, would be their goalkeeper Robert Green.

Then 27, Green had joined West Ham from Norwich City the previous summer, ousting Roy Carroll in October 2006 and helping his new club to a 1-0 win over Arsenal at the Boleyn Ground on just his fourth appearance in Claret and Blue.

That proved to be a false dawn, however, as the struggling Hammers conceded six at Reading, four at Bolton Wanderers and Charlton Athletic and four at home to Tottenham Hotspur. By the time he boarded the bus for the seven-mile trip to Arsenal, Green and his teammates had conceded 31 goals in just 19 Premier League appearances and finished on the winning side on just six occasions.

All things considered, the England international would need produce one of the performances of his career to help West Ham make history by becoming the first visiting team to win at Emirates Stadium.

Green himself takes up the story of an unforgettable, scarcely believable afternoon in north London…

“Back in 1999, I’d kept a clean sheet on my debut for Norwich City against our East Anglian rivals Ipswich Town and had gone on to make 241 appearances for the Canaries ahead of moving to West Ham in summer 2006,” he began.

“In April 2007, I was in the Hammers team that headed to north London for our first-ever match at the Emirates.

“With just seven games remaining, we were five points adrift of safety. Nobody gave us a chance against the Gunners, but it was one of those matches where I just couldn’t do anything wrong.

“We were under pressure from the off and I soon saved from Cesc Fabregas and Freddie Ljungberg before denying Emmanuel Adebayor and Tomas Rosicky. Then, seconds before half-time, Lucas Neill sent Bobby Zamora away and he lobbed Jens Lehmann to somehow put us ahead.

“It was the same story in the second half, too. We were under siege and the Arsenal players were smiling in disbelief because they just couldn’t score. Carlton Cole reckoned there was a Jedi force-field around my goal! 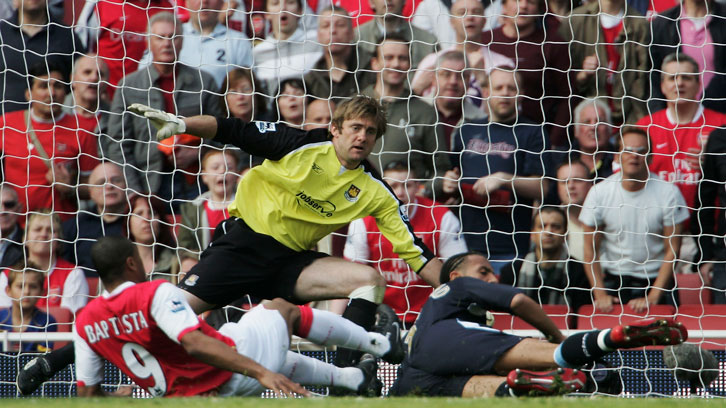 “In stoppage-time, Lehmann arrived in our penalty area for one final corner, which I came and claimed before hearing a German voice shout: ‘Please don’t shoot!’.

“Wasting precious seconds, I fell onto the ball and, although Arsenal had won 25-5 on shots and 14-1 on corners, we’d held on to become the first visiting team ever to win at the Emirates.

“Shaking hands afterwards, Jens thanked me. ‘If you’d kicked that upfield, you’d have scored as you were having such a good match today’!’ he laughed.”

“Without doubt, that was my greatest game… ever!”