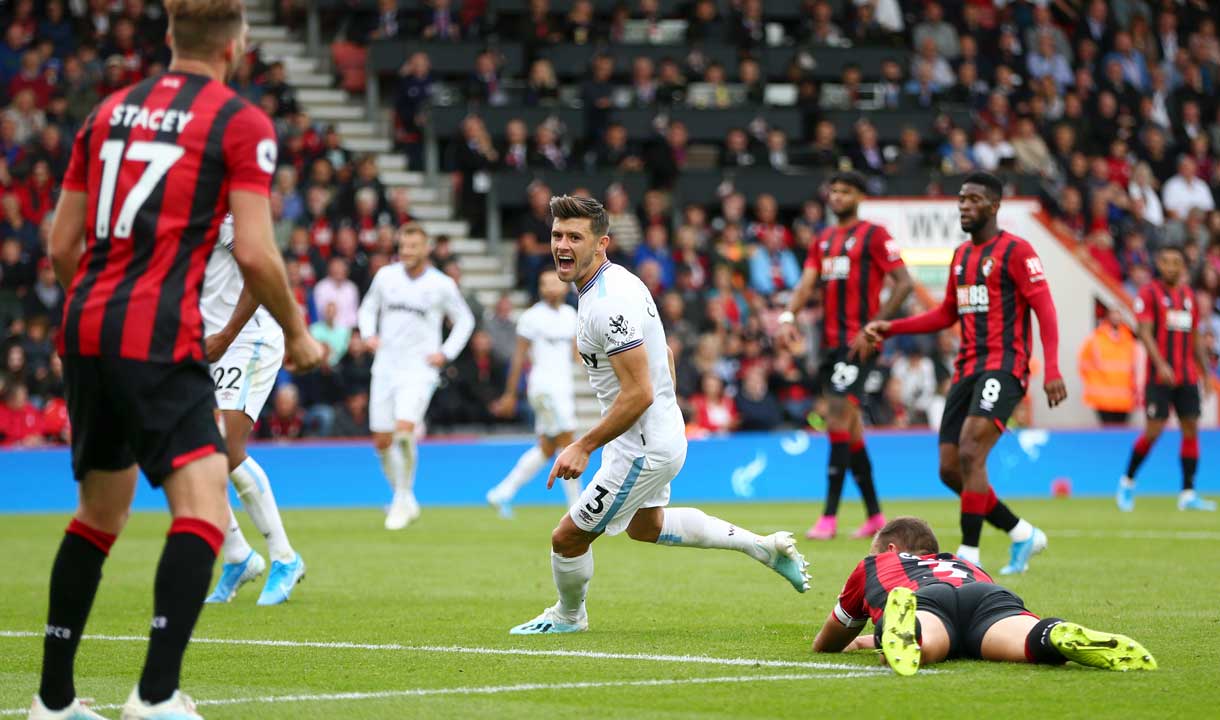 Andriy Yarmolenko and Aaron Cresswell were on target for the second week in a row as West Ham and Bournemouth traded the lead before drawing 2-2 on the South Coast on Saturday.

Yarmolenko struck early to give the Hammers a tenth minute advantage, only for Josh King to equalise – with a helping hand from VAR – shortly afterwards.

Less than a minute into the second half it was Bournemouth’s turn to edge in front when Callum Wilson fired home, but West Ham kept their heads and earned their point 16 minutes from time thanks to Cresswell.

It means Manuel Pellegrini’s men are still undefeated in the Premier League since the opening day – and haven’t lost on the road since April.

West Ham made a strong start and were rewarded with the opening goal just ten minutes in.

Man of the moment Yarmolenko was the goalscorer, holding off Nathan Ake’s challenge to spin and curl into the bottom corner after being set-up by Sebastien Haller inside the area.

However, the lead was to last only seven minutes, as King hit back for the home side swiftly. His celebrations were initially cut short by an offside flag, but a VAR check showed he was behind Ake when the home defender knocked on following a short corner, so the goal stood.

With 34 minutes on the clock West Ham had to make a change in goal after Lukasz Fabianski went down clutching his leg after taking a goal kick, giving Roberto a Premier League debut from the bench.

Both teams were showing plenty of attacking threat, with the hosts’ full-backs pushing up high and Felipe Anderson and Yarmolenko trying to exploit the space left behind.

It was the West Ham No8 who came closest to adding a second before the break, having his volley flicked over on the bounce by Bournemouth stopper Aaron Ramsdale in stoppage time.

If the Hammers made a fast start to the opening period, Bournemouth made an even speedier start to the second, taking the lead just 25 minutes after the restart.

Callum Wilson, so often the scourge of West Ham, was at it again, firing past Roberto’s right hand after his fellow forwards Dominic Solanke and King combined neatly to lay on the chance just inside the area.

Bournemouth thought they had scored a third shortly afterwards, but their celebrations following Ake’s close range finish were cut short when Solanke was adjudged to be standing in an offside position in front of Roberto.

Callum Wilson had a golden chance to put the game to bed on 73 minutes, but could only shoot at Roberto after his namesake Harry threaded a pass through to him – and the Hammers punished him a minute later.

It was a lovely goal, too, as Yarmolenko cut onto his left foot to stand a cross up to the far post. Felipe Anderson was aware of Cresswell steaming up behind him, and nodded down for the left-back to smash into the net.

Declan Rice drew a sprawling stop from Ramsdale with a low drive from range as the Hammers pushed for a winner, but they were content with the point which keeps them among the division's early frontrunners.