The first was a 17-year-old Mark Noble and the second, eight minutes later, was a 38-year-old Teddy Sheringham.

Fifteen years on, Noble is still going strong at the age of 32, and will captain his boyhood club against another of Sheringham’s former teams, Manchester United, at London Stadium on Sunday afternoon.

Speaking to the Official Programme, Sheringham is delighted to see his old teammate still excelling in Claret and Blue.

“I also like the fact that they’re still being led by my man Mark Noble which is fantastic to see because he’s some player,” continues Teddy, who was already a 38-year-old veteran, when the current West Ham skipper – 21 years his junior – made his debut against Southend United in a Carling Cup second round tie in August 2004.

“I’d only just arrived at West Ham after signing from Portsmouth and we both came off the bench. Aged 17, he was still an old man – Nobes has never been a kid! West Ham are lucky to have someone like Mark because he knows the Premier League inside out and realises what makes West Ham United tick, too. Without doubt, he’s on the same wavelength as Pellegrini in terms of what the manager’s trying to achieve.

“Sure, he’s not the quickest but intelligent players don’t have to charge around because they can read the game,” continues the 51-times capped England international, who led by example after playing until he was 42, making over 950 career appearances and scoring some 360 goals along the way.

“Right now, you can see that Mark’s really enjoying his football and being part of this exciting West Ham team. He’s certainly got the drive to keep himself at peak fitness levels and having been fortunate enough to steer clear of any serious injuries so far, hopefully he can keep that going.” 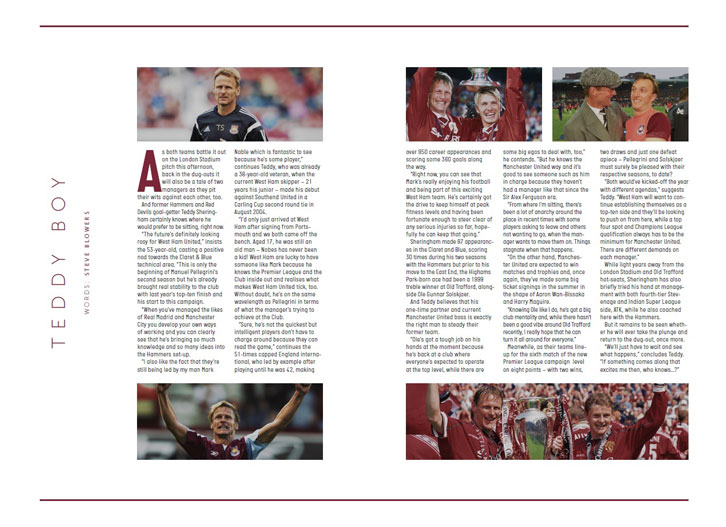 Whether you are planning to be at the match, watch at home or are simply a loyal West Ham fan or collector, the easiest way to get your copy each week is to subscribe. The deal includes all home Premier League, Carabao Cup and FA Cup home fixtures, so subscribe now!