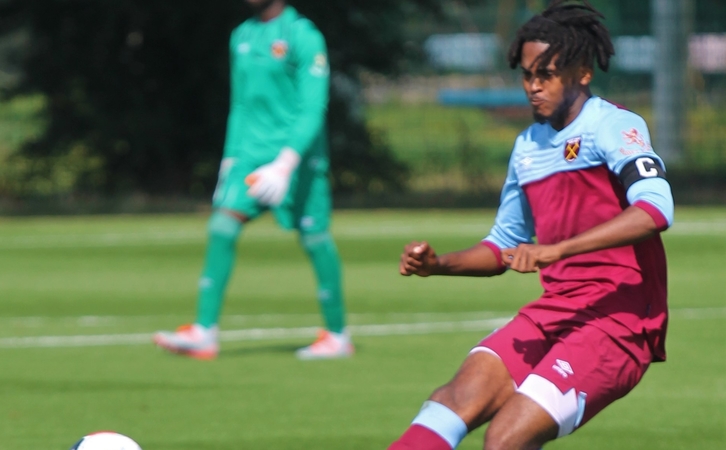 Goals from Sebastien Nebyla, Veron Parkes and Sam Caiger were enough to see Kevin Keen’s side pick up their first away victory of the season.

With the win the U18s move up to 4th in the U18 Premier League South and are now unbeaten in their last three games.

I thought we've played well in all of our games.

“I felt that we were always in front throughout the match,” said Phillips. “In the last 10 minutes they started to ask serious questions. I thought Will Greenridge defended excellently throughout against a very difficult Tottenham team.”

West Ham now have 8 points from their first five league games and have successfully negotiated a tough opening run of fixtures.

“We’ve already faced Chelsea, Arsenal and now Tottenham this season, and these are teams that usually do well in this division. I thought we played well in all of those games.”

West Ham made a great start and were in-front after just 10 minutes- a swift passing move resulted in Sebastien Nebyla finishing calmly beyond Kacper Kurylowicz in the Tottenham goal.

The hosts grew into the game and equalised early in the second half through Enock Asante, however, the scores were only level for a matter of minutes.

A 25 yard-free kick from Veron Parkes crashed in off the crossbar to send the Irons back-in front, the 17-year-old Parkes has been in excellent form so far this season and found himself on the scoresheet again after scoring in the 5-4 victory over Newport County in the EFL.

Midway through the second period Tottenham equalised for the second time through winger Chay Cooper. The Hammers looked to be heading for their third successive draw in the U18 Premier League South despite an excellent display.

As time began to wind down West Ham U18s resilience shone through and a marauding run from Sam Caiger resulted in a powerful strike from distance to seal the victory in North London.