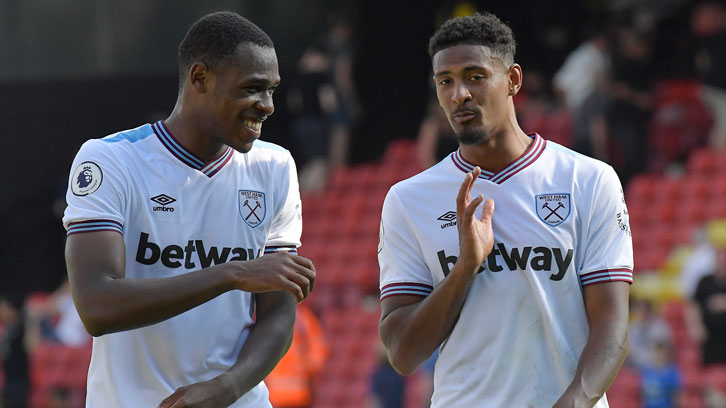 Issa Diop has been hugely impressed, but not surprised, by the impressive way Sebastien Haller has kicked-off his West Ham United career.

The defender’s former France U21 teammate has three goals in as many Premier League matches, while his all-round abilities have drawn praise from players, pundits, coaches and supporters alike.

And, having had his talents recognised at age-group level in the past, Diop believes Haller has the quality to earn a full international cap if he keeps producing the goods in Claret and Blue.

He has played well for a long time, but he just has to keep going like this, playing good games and scoring goals, and if the selection [for France] comes, then it comes

“Like I said before when we signed him, it is not a surprise to me that Seb has done well because I have played with him and I know all his capacity to be good in England because he has everything to be a very good striker in this league,” said the 22-year-old. “He has the ambition to be the best. He’s very good, he’s very clever and after Watford he was not very happy because he said he played badly and we played badly but he scored two goals, so it’s good and I hope he’s going to be bad all season and score two goals in every game!

“This is not Seb’s first good season. He has played well for a long time, but he just has to keep going like this, playing good games and scoring goals, and if the selection [for France] comes, then it comes.”

While Haller has already found the net on three occasions, Diop has yet to score this season, but that not through wont of trying!

The centre-back has brought the ball out of defence on a number of occasions before laying it off and continuing his forward run into the opposition half.

On one occasion in the 2-0 home win over Norwich City, the No23 ended up wide on the right, putting in a cross for his fellow countryman, and he insisted his appearances in the final third are more by judgement than luck!

“Maybe one day it will end with a goal, but it’s not my target!” he smiled. “My target for me is to not concede goals and if we don’t concede goals, I’m happy. Now I do this more before during the training sessions, when I did this before, after the first pass I stopped, but the manager told me: ‘Go! Go!’ so now I follow his instructions!

“It’s not something I work on in particular in training, but we know what to do when I go. Dec drops into the defence and I go! I only do it when I feel it is the right time to do this. The thing is, if I do this, I need to be efficient and only pick the right moments to go.

“Like everyone, when I was young, I started playing as a striker, so going forward is not new to me. One day a goal will come, I am sure, but we will see!”