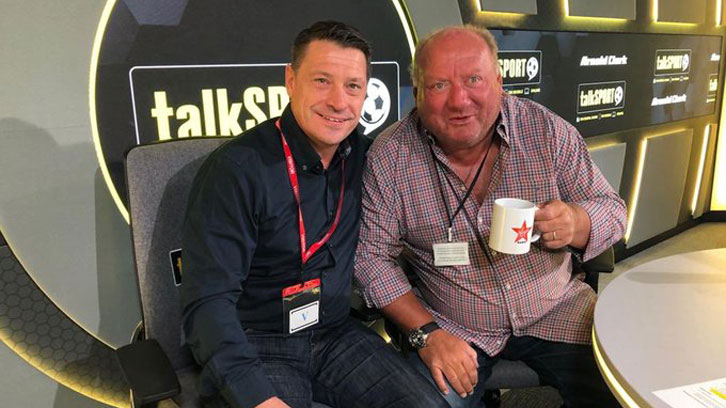 West Ham United legend Tony Cottee has revealed that he is on the road to a full recovery after suffering a small brain haemorrhage in the summer.

The Hammers hero, who scored 146 goals during two successful spells in Claret and Blue was rushed to hospital after being taken ill at a central London hospital in July. Speaking on talkSPORT’s Alan Brazil Sports Breakfast, the former marksman discussed his successful treatment, thanked his friends, family and former teammates for their support and urged anyone worried about their health to speak to a doctor as soon as possible.

Everyone at West Ham United is delighted that Cottee is on the mend and look forward to welcoming him back to London Stadium again soon.

“July 8 this year, only a couple of months ago, I was meant to be filming an advert for Sky, so I went to stay in London because it’s a long way for me to get there in the morning and I had to be there at half-past eight, and I was in my room the night before not doing anything out of the ordinary, and I got a small pain in the middle of my forehead to start with,” Cottee explained, in discussion with presenter and former Ipswich Town and Scotland striker Brazil.

“But within five minutes it was the worst headache I’d ever had in my life. I then had really severe neck pains and through the night I was sick four times. Obviously I was meant to be working in the morning. I rang my missus and said I’d been ill in the night and she said: ‘Was there anyone at the hotel?’ and luckily enough Thommo was there, [former Liverpool defender and Cottee’s Sky Sports colleague] Phil Thompson, and I asked him to come to my room and he said: ‘Wow, you look awful!’.

“He managed to arrange for a doctor to come to the room as I was in bed. They transferred me to West Middlesex Hospital and did a brain scan on me. Originally, they thought I had meningitis, which was scary as they had people with masks on all around me, and they found I’d had a small bleed on my brain, a small brain haemorrhage.

“Immediately I was transferred to Charing Cross Hospital and I can’t speak any more highly of the doctors and nurses, who were unbelievable at West Middlesex and Charing Cross. They did all the tests and I had a lumbar puncture, an angiogram and MRI scans and they wanted to check as I could have had an aneurism, a stroke or a heart attack and could have dropped dead. I am so lucky.

"I was in my room and I got a pain in the middle of my forehead."

"It was the worst headache I'd ever had. I was sick four times."

“It was a major trauma and I can’t fly for the rest of the year. I had to have six weeks’ rest and anyone who is a follower of Soccer Saturday will have noticed I wasn’t on the first three or four shows. I couldn’t work. I had to rest and wait for the results to come through. They’ve said they’re confident that it was a one-off.

“They don’t know what brought it on. We’re all busy leading our lives, working hard, travelling, socialising and maybe drinking a little bit, and I probably fall into all of those categories.

“It’s been a bit of a wakeup call, to be honest. I’ve just turned 54 and I had four medicals just before Christmas and I was fine, so within the space of eight months I was in hospital and everyone was around me and was worried.

Really great morning at @SportsBreakfast on @talkSPORT today. I gave my views, & you’re giving yours, that’s one of the great things about our Beautiful Game . Hope you enjoyed it!👍⚽️ @talksport #football #PremierLeague #EFL pic.twitter.com/mOkVX4m8Ul

“Everyone has been brilliant. Tony Gale is a really good friend of mine and he came up and brought my wife up. I didn’t tell everyone what had happened because I’m not that sort of guy. I’m a bit old-school and if you’re ill, you deal with it and move on.

“But if anyone experiences that pain in the middle of your forehead and neck ache, you’ve got to go to the doctors or hospital. I knew I was in trouble and I was in the hotel and I couldn’t walk or drive to the hospital as it was three or four in the morning.

“It was worrying times and for the first and only time in my life I was really, really worried, so it was a very scary time. Everyone around me has been really supportive and it’s been good to talk about to make others aware.

“We’re of a generation where you don’t to the doctors because you don’t want to make a big thing of it, but I now know there are times where you really need to do it.”