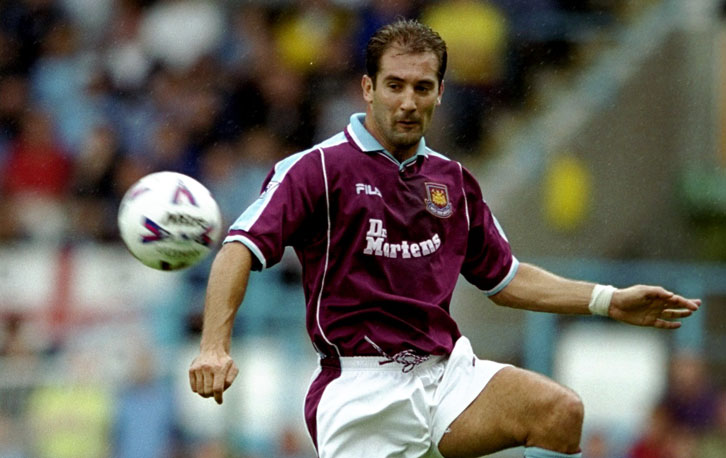 Twenty years ago, West Ham United famously lifted the UEFA Intertoto Cup to qualify for Europe for the first time since winning the FA Cup in 1980.

The Hammers defeated Jokerit of Finland, Heerenveen of the Netherlands and French side Metz to reach the UEFA Cup first round, where they were paired with Croatian outfit Osijek.

While the Croatian Cup winners were something of a mystery to West Ham supporters, they needed no introduction to the Irons’ new centre-back, Croatia international Igor Stimac.

The £600,000 signing from Derby County had spent the early part of his career in his homeland, winning the Croatian First League title twice with Hajduk Split, before moving to the Premier League in 1995.

The following year, he paired with another future Hammer, Slaven Bilic, at the heart of the Croatia defence as the newly-independent Balkan nation caught the imagination of the football world by reaching the quarter-finals of UEFA Euro ’96 in England. In 1998, Stimac was part of the squad which impressed again, finishing third at the FIFA World Cup finals in France.

After four successful seasons with the Rams, the 31-year-old moved to the Boleyn Ground in late August 1999, where he joined Harry Redknapp’s exciting, multi-talented, multi-national squad, fresh from a fifth-place Premier League finish in 1998/99 – and that famous Intertoto Cup success.

“What a fantastic team that was...” Stimac recalled in an exclusive interview with whufc.com “We had amazing players - Di Canio, Wanchope and Kanoute, British players like Razor (Neil Ruddock), Lomas and Moncur, Trevor Sinclair and youngsters in Rio, Frank, Carrick and Joe Cole.

“Then of course Harry was the manager. He was a very similar character to Jim Smith, my manager at Derby – funny and authoritative, simple and honest. I miss guys like them in football these days...”

Stimac made his West Ham debut in a 1-0 Premier League win over Watford on 11 September 1999 – 20 years ago today – that lifted Redknapp’s side up to third in the table.

Five days later, he lined up alongside his new central defensive partner Javier Margas against Osijek for the UEFA Cup first-round first leg in Upton Park. Goals from Wanchope, Di Canio and Lampard secured a 3-0 win and all but secured the Hammers’ progress to the second round.

“We were a much better side than Osijek and the only question was how seriously we going to approach the game,” said Stimac, who it later emerged should have been suspended for the tie after being sent-off while playing for Hajduk Split against Panathinaikos in 1995, only for UEFA to forget to inform the Hammers!

“We were catching up with our form but our individual class made the difference, even though Osijek had some great chances in the first leg.”

While West Ham had all but done the job in the first leg, the adventure was far from over, as the squad – and a handful of supporters – made the trip to a city which had been ravaged by the Croatian War of Independence just seven years before.

Despite being a new member of the squad, Stimac took on a leadership role, showing his teammates the scars of the Battles of Osijek and Vukovar, which left nearly 3,000 people dead and thousands more homeless during the winter of 1991-92.

For footballers, many of whom had little or no knowledge of the conflict, it was a harrowing experience, but one Stimac felt he needed to share.

“My heart is always beating hard going back home,” he revealed. “I took charge of making sure the lads didn’t get bored, giving them tour around Vukovar, a city on the border with Serbia which was totally destroyed during three months of bombing and organising few other things.”

On the pitch, Marc-Vivien Foe, Paul Kitson and Ruddock scored to complete a 6-1 aggregate victory, but West Ham’s UEFA Cup hopes would be ended in the next round, where Romanian Cup winners Steaua Bucharest proved too strong.

Twenty years on, Stimac still keeps a close eye on his former club and believes Manuel Pellegrini has the players to lead West Ham back into Europe.

“It’s good to be ambitious,” he observed. “West Ham is great club with enormous tradition and with such a big support behind the lads should be aiming for European spots. The squad is full of good players and we have started picking up good results now.”

While Stimac, who turned 52 on 6 September, is eager for the Hammers to thrive, he has the footballing future of the world’s second-largest country to worry about, too.

Since May, he has been manager of India, and has hopes of guiding a squad made up exclusively of home-based players to their first-ever FIFA World Cup finals in 2022.

Ranked 103 in the world, behind Palestine, Vietnam and the Kyrgyz Republic, India remain long shots to reach Qatar, but a goalless draw with the hosts in Doha this week has raised expectations that something historic could happen.

Football is growing rapidly in a country of 1.3 billion people, with the introduction of the Indian Super League in 2013, and Stimac is relishing his leading in its development there.

“I am enjoying every bit of my work here,” he confirmed. “I was brought not only to manage the senior and U-23 team, but to help in restructuring and developing football in all levels.

“There is plenty of work in front of me but we have some great and well-educated people around and in the AIFF (All India Football Federation) so we are confident that there are many great years in front of us!”