West Ham United captain Mark Noble is encouraged by the manner in which a number of his teammates have started the season.

The Irons may have got off to a difficult start to their 2019/20 Premier League campaign, falling to top-flight champions Manchester City before drawing with Brighton, but have since impressed by recording three wins on the bounce in all competitions.

Noble has started both league victories so far – the 3-1 win at Watford’s Vicarage Road, and the 2-0 victory over Norwich at London Stadium a week later – and has seen plenty of encouraging signs in the performances of key individuals and the team as a whole.

Seemingly ubiquitous against Norwich was Felipe Anderson, whose man-of-the-match display led the charge against the Canaries, tirelessly defending from the front while always providing a threatening option on the counter-attack.

During the game, Anderson recorded most completed passes (72), successful dribbles (seven of eight attempted), and three key passes, including the pass that set Arthur Masuaku away to assist Sebastien Haller’s opening goal.

West Ham skipper Noble was full of praise for the Brazilian’s overall performance, complimenting the impact he made on both sides of West Ham’s game.

“That’s why you pay the big bucks for these sorts of players!” Noble said.

“Everyone loves the skills and the running, but it’s not just that - his work-rate off the ball, getting back and tackling, is fantastic.

“He’s a really special player, and I’m hoping we can keep him fit and playing like that for the rest of the season.”

After Masuaku’s cross set up Haller for the first goal, the Hammers continued to surge forwards after the break, their slick football yielding a deserved second from the boot of Andriy Yarmolenko.

The popular Ukrainian attacker was in the right place at the right time to score his first goal in the Claret and Blue since suffering an Achilles injury last October, and Noble believes his spirited recovery has energised the entire team.

He said: “I think everyone was really pleased for him. We’ve all seen what he’s been through in the last ten months.

“He started off really well for the Club and got a couple of goals, but then he got that injury. No matter what, even if you’re injured for two weeks, you don’t feel a part of it as you’re not out there training with the lads, and he has suffered.

“He’s had a whole summer to think about it and pre-season was hard for him to get up to speed, but I thought he looked really good, and for him to get his goal, the whole team was really pleased and buzzing that he managed to do that.” 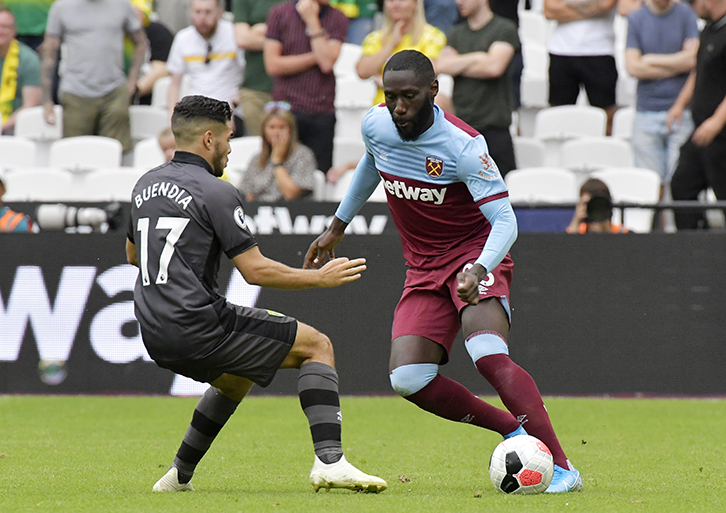 Another player whose productive pre-season is yielding dividends is flying left-back Masuaku, who was named in WhoScored.com’s European Team of the Week last week.

The Congolese international put pen-to-paper on a long-term contract extension at the end of July, and has since enjoyed an excellent start to the season, completing six tackles against the Canaries – the most of any player on the pitch.

Noble was full of praise for the full-back, the Hammers' defence, and the team's level of control against Norwich as a whole, with West Ham recording their first clean sheet of the Premier League season.

He said: “I thought he was brilliant and, to be honest, I thought the whole back four was brilliant to keep [Teemu] Pukki quiet because he’s such a good goalscorer.

“I thought the aggression we played with, the power and pace and control, was brilliant. For me, that’s the best we’ve played for a long time.”

The long-serving skipper will be hoping the Hammers can maintain their impressive early-season form when they travel to newly-promoted Aston Villa on Monday 16 September, before hosting Manchester United on Sunday 22 September.