West Ham United manager Manuel Pellegrini has confirmed that Aaron Cresswell will be fully fit for the visit of Sheffield United on Saturday afternoon.

The left-back missed the Hammers’ trip to Goodison Park last weekend, but Pellegrini expects the 29-year-old to be available for selection at London Stadium.

Speaking at his pre-match press conference at Rush Green Training Ground, the Chilean confirmed that Cresswell had enjoyed a productive week in training.

“Compared with last weekend, Aaron Cresswell worked the whole week without any problems,” he confirmed.

Pellegrini also offered updates regarding returning defender Winston Reid, who could be in line for a return to action for the Under-23 side next week when Dmitri Halajko’s side takes on Germans VfL Wolfsburg in the Premier League International Cup.

“Winston Reid continued his recovery and probably he will play the next game with the U23s on Wednesday,” Pellegrini continued. “[His absence] has been too long for him. It’s not easy to be more than a year and a half without playing a game, but he’s a strong man. He’s always working and I hope that this coming week he will play without any problems the game with the U23s.”

Goalkeeper Roberto excelled against Everton on Saturday afternoon, and Pellegrini reiterated his delight with the goalkeeper who has started every game since Lukasz Fabaniski left the field against Bournemouth with injury.

“I don’t need for Roberto to make so many saves to demonstrate that he’s a good goalkeeper,” Pellegrini said.  “He has a career behind him, we know him perfectly as a goalkeeper, as a professional football player, so as I said before the game I trust him one hundred per cent.”

West Ham’s game against Sheffield United kicks off at 3pm on Saturday afternoon, and is followed up the following weekend with another home game at London Stadium – a 3pm kick-off against Newcastle United on Saturday 2 November. 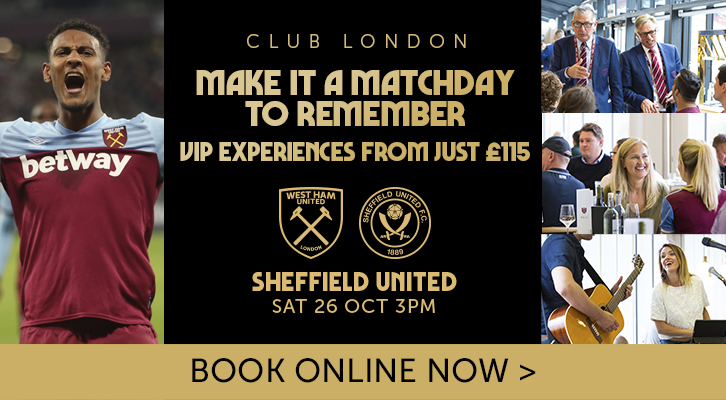