Anthony Scully nominated for Premier League 2 Player of the Month 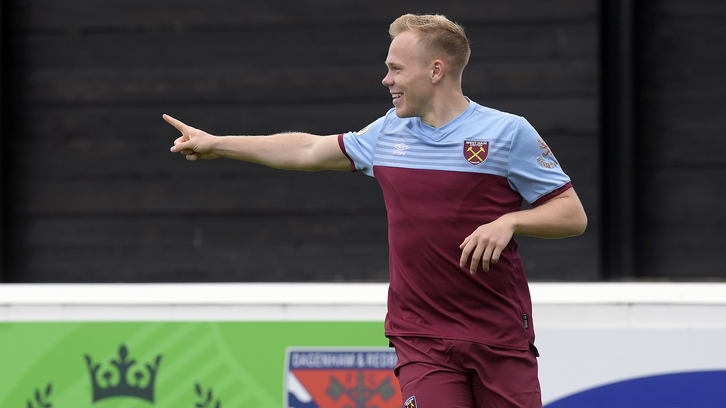 West Ham United U23s striker Anthony Scully has been nominated for the Premier League 2 Player of the Month for September.

The 20-year-old Irishman found the net six times and registered two assists across the Hammers’ three PL2 victories, helping the U23s climb to the top of the Division 2 table.

It’s a great feeling to be up for the award for September, I’m absolutely delighted.

Scully also scored twice in the 5-4 triumph against Newport County in the Leasing.com Trophy at the start of the month. The physical forward opened the scoring in the first minute and then completed the comeback when he bundled home just shy of added time.

“I’m really happy to be nominated,” said Scully. “It’s a great feeling to be up for the award for September, I’m absolutely delighted.”

“It was a great month, not just for me but as team. We managed to get a great result against Newport in the EFL Trophy and we maintained our good league form to stay top of the table, so the month has been really positive for the squad all round.”

The forward also praised his teammates for their attacking play so far this season.

“The lads have been so important for me. This month we’ve got great results, and everyone has been so important to get the results we have had. I’m really loving playing up front with the three lads: Dan Kemp, Joe Powell and Nathan Holland.

“As a striker you always need the service and I’ve certainly had that. The four of us are really enjoying playing together and we are all trying make opportunities for each other, so when it’s like that it’s really enjoyable.”

The other nominees for September’s award are: Folarin Balogun of Arsenal, Antony Evans of Everton, George Hirst of Leicester City, James Garner of Manchester United, Rosaire Longelo of Newcastle United, Michael Olise of Reading and Callum Slattery of Southampton.

Scully becomes the second successive Player of the Month nominee for the Hammers’ U23 side, after Dan Kemp was nominated for his excellent start to the season back in August.

West Ham U21s return to Leasing.com Trophy action next week, travelling to The Jonny-Rocks to face Cheltenham Town in the second game of group stage.

A win would see Dmitri Halajko’s take a huge step in qualifying for the knockout stages of the competition for the first time since the 2017/18 season.