Conor Coventry receives another Republic of Ireland U21 call-up 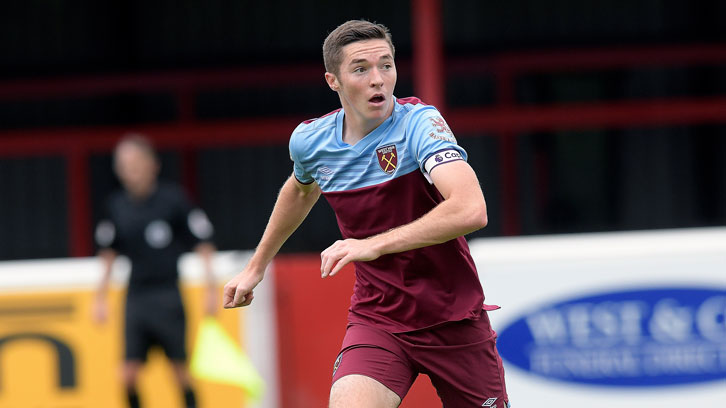 Conor Coventry has been named in the Republic of Ireland U21 squad for his country’s 2021 UEFA European Under-21 Championship qualification Group 1 matches against Italy and Iceland.

The Boys in Green sit top of their group after kicking off their campaign with three straight wins over Luxembourg, Armenia and Sweden.

Now, Stephen Kenny’s side will seek to strengthen their position by taking maximum points from the two games to be played in October.

West Ham United U23s captain midfielder Coventry and his compatriots will host Italy at Tallaght Stadium in Dublin on Thursday 10 October, before travelling to Reykjavik to take on Iceland on Tuesday 15 October.

Coventry, who has become an integral member of Kenny’s team in recent months, starting all three qualifiers and previously helping Ireland reach the semi-finals of the Toulon Tournament in the summer.

The 19-year-old, who has led the U23s through an unbeaten season to date and made his second Hammers appearance in the recent Carabao Cup second-round win at Newport County, has seven Ireland U21 caps to his name.

He will now hope to lead Ireland to the European Championship finals for the first time in their history, with 16 nations qualifying for the tournament, which will be held in Hungary and Slovenia in June 2021.

Elsewhere, midfielder Josh Cullen, who is on loan at EFL Championship club Charlton Athletic, has been included by Mick McCarthy in the senior Republic of Ireland squad for Group D fixtures in Georgia and Switzerland.

Halajko: There were lots of positives in our performance
Last Match
Tuesday 19 January 18:00
London Stadium