But exactly 39 years ago today, just 262 people were present to see the Hammers defeat Castilla of Spain in the European Cup Winners’ Cup, with centre forward David Cross scoring West Ham’s only hat-trick in continental competition.

Crowd disturbances in Madrid at the first leg of this first-round tie meant the Boleyn Ground was closed by UEFA to everyone but the players, club officials, ball boys and the media for the return game, which has since become known as the 'ghost' match.

Amid the trouble, the Spanish Cup runners-up – Castilla were Real Madrid’s ‘B’ side and had lost to their own first-team squad in the final – had defeated the English FA Cup holders 3-1, meaning John Lyall’s Second Division side needed to produce an outstanding performance and result to turn things around.

With the players’ voices echoing around the near-empty stadium, it would have been easy for the Hammers to surrender meekly but, to their credit, exactly the opposite happened.

We won 5-1. I scored a hat-trick, but it was an odd experience

“The first leg was my first game in Europe, in the Bernabeu Stadium!” Cross recalled. “It was a big thing and we didn’t perform.

“They were Real Madrid’s development team, a young bunch but with a handful of players who went on to become Spanish internationals. They were no fools.

“There was also a bit of bother in the first game with our fans and a discussion that we might be thrown out of the competition altogether, or at least forced to play the second leg in a neutral city, such as Paris.

“But we got the go-ahead to play at our stadium, without any supporters. The attendance was 262. We won 5-1. I scored a hat-trick, but it was an odd experience.” 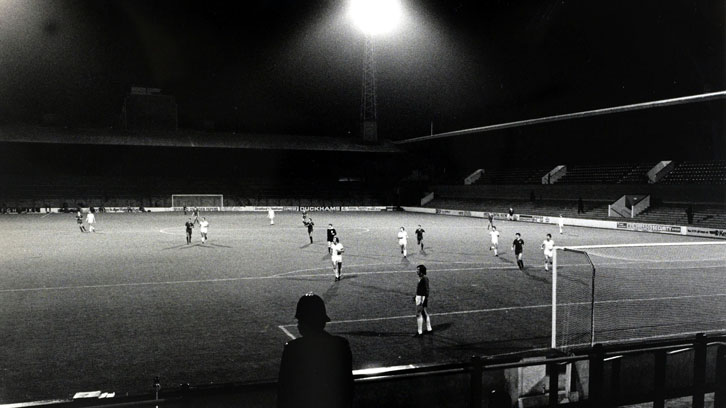 On the pitch, Geoff Pike pulled one goal back with a 25-yard strike before Cross levelled the tie on aggregate when he headed home Trevor Brooking’s cross, putting the Irons ahead on the away-goals rule.

Paul Goddard made it 3-0 – and 4-3 on aggregate – before half-time, only for Castilla captain Bernal to net an audacious 35-yard free-kick to level things up again, albeit with West Ham still ahead on away goals, which would come into play after extra-time.

However, the hosts finally prevailed in the extra half-hour, with Cross scoring a second header before completing his hat-trick with a minute to play, tapping home Alan Devonshire’s cross as Castilla threw players forward in search of match-turning second away goal.

The hosts celebrated their progress when the final whistle was blown minutes later but, due to the circumstances already explained, there were next to no supporters there to share the moment with them.

On This Day: Carroll at the double in Boro win

On This Day: Bowen, Antonio down West Brom

On This Day: Cole scores in Fulham victory

On This Day: Hammers tame Tigers

On This Day: Adrian's penalty heroics

On This Day: Barnsley beaten in FA Cup

On This Day: Carroll haunts Liverpool