The Academy of Football continued to shine on the international stage last night as four of its products were in action for their respective nations and age groups.

At the heart of Republic of Ireland’s U21 side was deep-lying playmaker Conor Coventry, who once again impressed on the ball in a storming 4-1 win over Sweden U21 in Dublin.

The West Ham U23s captain was making his seventh consecutive start in the Boys in Green’s 2021 UEFA European Under-21 Championship qualification campaign, but saw his side fall behind in the first half to Viktor Gyokeres’ 18th-minute individual effort.

A victory was needed to ensure Stephen Kenny’s side remained at the top of Group A, and the home team raced out of the traps in the second period to record three points in style.

A sweeping finish from Lee O’Connor in the 49th minute, plus a close-range goal from Adam Idah in the 61st, a curling strike by Troy Parrott in the 74th and a tap-in from Zach Elboudezi with three minutes remaining, capped a resounding second-half comeback.

Republic of Ireland U21s now sit three points clear of nearest-challengers Italy U21 at the top of the group, albeit having played two games more.

Only the team in first qualifies automatically for 2021’s tournament in Hungary and Slovenia, with the second-placed side likely to face play-offs, so Coventry and Ireland will be pleased to have secured further points in a tricky-looking game.

Fellow Academy graduate and loanee Grady Diangana, meanwhile, enjoyed an impressive debut for England U21s, despite his side falling to a 2-1 friendly loss to Netherlands U21.

Diangana brought the trickery and dynamism which has seen him star at West Brom so far this season to Doetincham, going close early on with a rising effort.

The winger proved a lively presence throughout his 76-minute appearance, but couldn’t prevent an injury-time free-kick by Javairo Dilrosun tipping the game in the hosts’ favour, after Mason Greenwood had cancelled out Kaj Sierhuis’ opener. 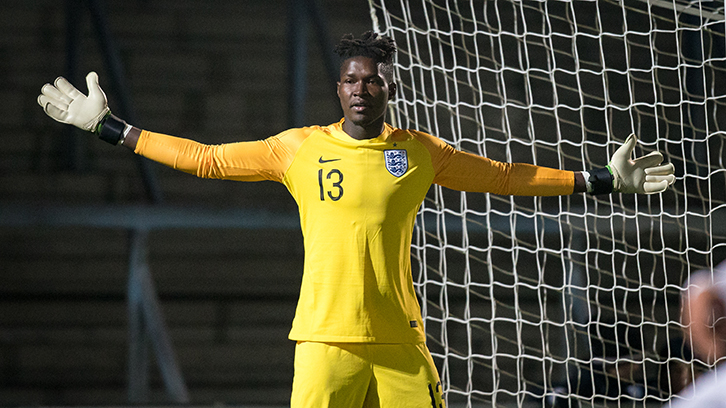 The 19-year-old shot-stopper came on for the final ten minutes of the Young Lions’ 3-0 friendly victory over Iceland U20s in Wycombe.

Goals from Danny Loader and a double from Ian Poveda gave Keith Downing’s side a solid victory in the preparatory game, and Anang will hope to retain his place in the squad for next year’s U20 Elite League fixtures.

Elsewhere, in the 2020 UEFA U19 European Championship qualifying rounds, Sebastian Nebyla played the full 90 minutes as already-qualified Slovakia U19 fell to a 3-0 loss to Italy U19.

Both teams will now advance to the Elite Rounds – seven groups of four teams, played out in the New Year – from which only the group winners progress to the final tournament.