In support of FA Women’s Football Weekend, the Year 7 and Year 8 pupils were given unique access to the women’s training facilities as they sought to learn more about the growth of the women’s game.

The students watched Matt Beard lead his squad in a tactical drill on the Rush Green pitch before meeting members of the squad, who posed for photos and signed autographs, before sitting down for a question and answer session with the head coach.

With ample opportunities to work in the quickly developing women’s game also available off the pitch, Valentines students also had the chance to ask questions of managing director Jack Sullivan, general manager Russ Fraser, the backroom coaching team and other members of the behind-the-scenes staff at Rush Green.

Fraser said: “We’ve had a partnership with the school where we’ve gone in, done training sessions and taken key players in to talk to them about what we do at West Ham United women. We thought it would be nice to actually have them come here, see the training facilities and the players first-hand.

“It went really well, and I think they were really engaged. I think schemes like this are really important for growing interest in the women’s game. It’s just growing more and more, year on year, and the more we can to help that, the better.”

I think schemes like this are really important for growing interest in the women’s game. It’s just growing more and more, year on year, and the more we can to help that, the better.

Having answered the tough questions from Valentines students, Beard was impressed with the thorough preparation the pupils had undertaken before visiting the West Ham United training ground.

The head coach hopes that these young girls have now been inspired to follow their dreams and find careers in football, whatever occupation they wish to hold.

“It’s great to have the school here today and for them to see the players train and to meet the girls, myself and the staff,” Beard said. “The questions were good. A lot of thought went into the questions and the girls came prepared with their questions written down.

“It’s not just about being on the football pitch. There are people that work behind the scenes as well. From the coaching staff, to the media team, to Russ as well. There’s a career in football for women and that will only go from strength to strength as the game continues to grow in this country.” 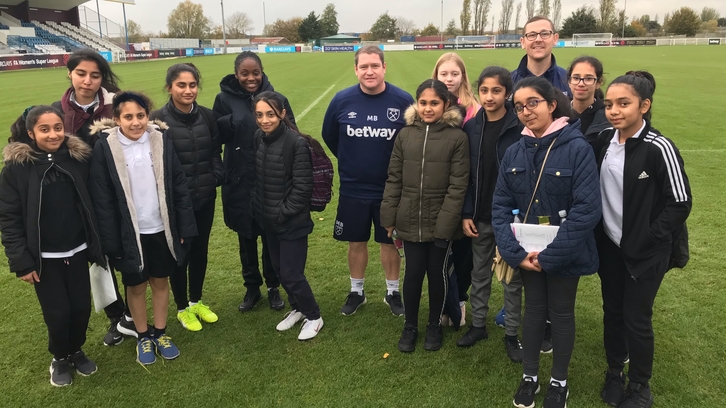 Valentines High School’s John Haxell believes the relationship with West Ham United women continues to show their students that working in football is a very real possibility for them, and also feels it is these types of experiences that will remain with them into their later years.

He said: “I think the important thing about this event was for us to get a really good insight into life in football. For our students in particular, knowing that it’s not just about playing football, but what other positions are there in football and what other careers could they go into? It’s been really nice to see, to experience, and talk to members of staff, the type of careers that exist.