Six West Ham United loanees were in action for their respective clubs this weekend.

Looking to strengthen their grip at the top of the Championship table were Grady Diangana and West Bromwich Albion, who travelled to the KC Stadium on Saturday to take on Hull City.

The 21-year-old winger proved a lively presence throughout, going close to opening the scoring after 20 minutes when he burst down the right-hand side before striking towards the near-post – but only finding the side-netting.

Jake Livermore would open the scoring for the Baggies just eight minutes later with a powerful hit from outside the area, and that was ultimately enough to split the two sides, Diangana shaving the post late in the second-half with a crisp finish.

The 1-0 win sees West Brom stay top of the division, two points ahead of closest challengers Preston and Leeds United.

Fellow loanee Josh Cullen, currently enjoying his second consecutive season with Charlton, endured a more frustrating afternoon as his team went down 2-1 late on at Millwall.

Making his 15th appearance of the season for the Addicks, playmaker Cullen began the game in a five-man midfield, but saw his side fall behind in the sixth minute to a Shaun Hutchinson header from a Millwall free-kick.

The West Ham loanee began to enjoy spells on the ball as the half wore on and clipped the bar with a deflected effort in the 38th minute, before delivering a corner after half-time that Millwall couldn’t clear, Jonathan Leko side-footing home the equaliser.

It wasn’t to be, however, as Milllwall substitute Matt Smith headed in an injury-time winner to condemn Lee Bowyer's Charlton to four games without a win.

Also in the Championship, Jordan Hugill came on as a second-half substitute for Queen’s Park Rangers as they drew 2-2 at home to Middlesbrough.

Nahki Wells’ 25th-minute strike and a Jonny Howson own-goal – either side of Britt Assombalonga’s first-half equaliser – had given the R's the lead going into the second half.

Assombalonga equalised again with a cool dink over the keeper in the second period, but despite Hugill going close to finding the home team’s third with a deflected shot, a point apiece reflected the contest as a whole. 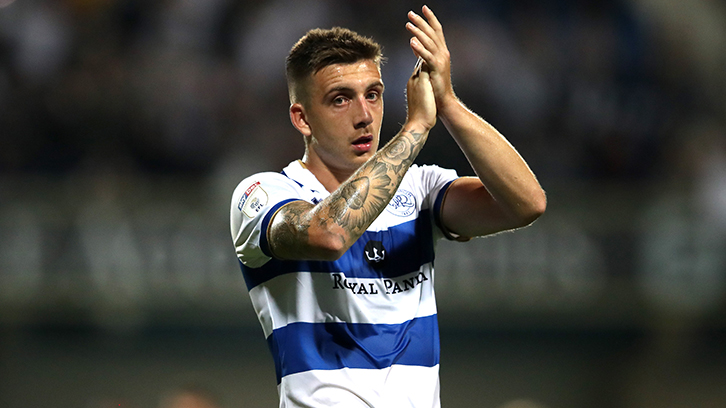 In the FA Cup first round, goalkeeper Nathan Trott and AFC Wimbledon were forced to settle for a replay at home to League One rivals Doncaster Rovers.

Trott displayed the excellent reflexes which have seen him called up to the England U21 squad in recent months, denying Kwame Thomas with an athletic save on the half-hour.

Joe Pigott’s close-range header then gave the Dons a first-half lead, but despite Trott doing well to deny James Coppinger’s drive, Doncaster would haul themselves back into the contest through Tom Anderson’s header at the near post.

The 1-1 draw ensures both sides will battle again for a place in the second round of English football’s most prestigious knockout tournament.

Defender Ajibola Alese, meanwhile, played the full 90 minutes for Accrington Stanley but saw his side suffer a 2-0 defeat at home to high-flying Crewe.

Goals from Charlie Kirk and Chris Porter settled a fierce contest which also saw Stanley reduced to 10 men late on with Mark Hughes’ red card, before ultimately being eliminated from the cup.

In Norway’s Eliteserien, Martin Samuelsen helped FK Haugesund to a 1-0 win over Viking – their opponents in the upcoming Norwegian Cup Final.

Haugesund proved much the better side but struggled to make a breakthrough until Niklas Sandberg’s 80th-minute penalty conversion.

The result lifts Samuelsen’s side to eighth in the table with two games remaining, but with a mid-table finish all but guaranteed, it more importantly inflicts an early psychological blow ahead of the showpiece occasion on Sunday 8 December.