Longhurst: Getting three points made the captaincy extra special 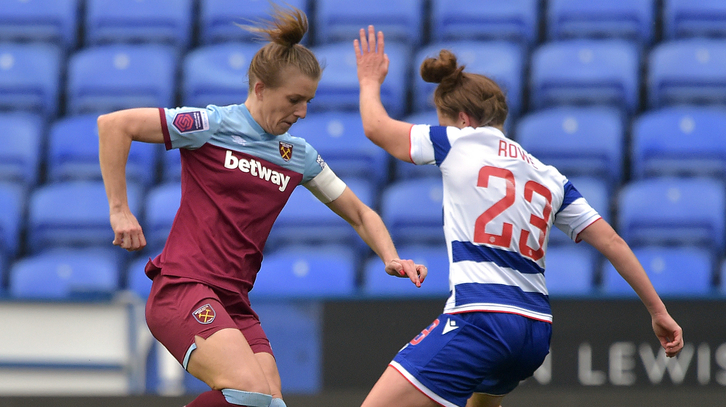 One game as with Kate Longhurst as West Ham United women’s captain. One win.

Team captain Gilly Flaherty could be in trouble after Longhurst, in the centre-back’s absence, led the Irons to a deserved 1-0 victory away to Reading on Sunday.

“It’s a 100 per cent record as captain so Gilly better watch out!” Longhurst laughed.

With Flaherty unavailable due to a knee injury, Longhurst was given the armband for the first time as a West Ham player, an honour the midfielder thoroughly appreciated and enjoyed; although not as much as taking the win.

“It means a lot,” she told whufc.com. “I’m more bothered about getting three points of course, because we needed them, but being captain and having the support of my teammates was really special. It was great to win with the armband as well.” 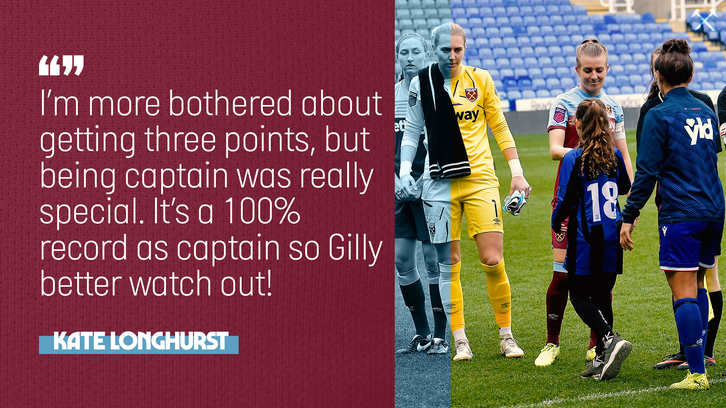 The victory – secured thanks to Alisha Lehmann’s 75-minute finish at the Madejski Stadium – keeps West Ham’s hopes of qualifying from Group D of the FA Women’s Continental League Cup alive. The Irons now have four points from their first three games.

Longhurst admitted a win was absolutely vital if the Irons were to remain competitive in their group and was proud of how the team performed on Sunday, particularly defensively with the clean-sheet.

The No12 said the Hammers were impressive throughout the whole match and believes the target is to now bring that level of performance in every game.

She continued: “We’ve been lacking clean-sheets. It’s not necessarily that we not been defending well in the last few games, but we’ve just switched off for a second and it’s cost us. Today, that’s not happened. We were on it from the first whistle and we didn’t switch off.

“Although they put the ball in our box a couple of times, we were comfortable. They didn’t really create any good chances and that was a positive for us. Everyone had a role in that. We played very well as a team. 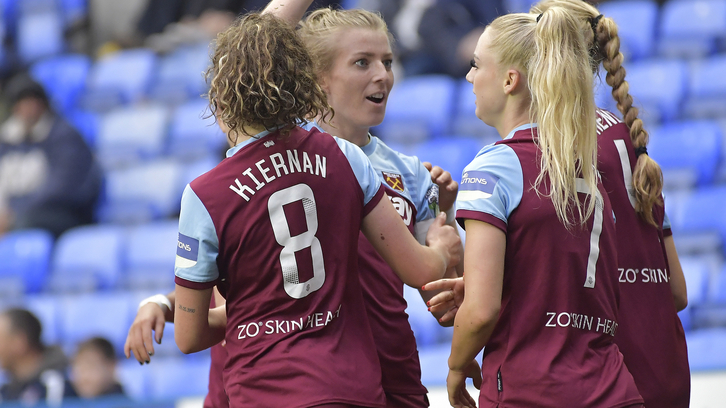 “We really needed this win. We would have been out of the cup if we didn’t get it. We needed these three points and the way we played, and defended at the end, showed the spirit we have in this team. Hopefully we can put that with good performances as well now on a consistent basis.”

Longhurst played on the right of a three-women defence against the Royals, as head coach Matt Beard lined up his side in a 3-4-3 formation. It worked wonderfully, allowing the Hammers to counter and score their winning goal.

Longhurst was happy with how the side adapted to the tactical tweak and feels the team got the best from the formation.

“It took us ten minutes or so to get to grips with the new set-up,” she added. “We were probably a bit too open at the beginning and not used to the movements they were creating, but we definitely improved on that as the game went on.

“We were organised and we were always dangerous on the break and that showed when we got the goal.”