West Ham United are pleased to confirm the signing of Spanish goalkeeper Roberto on a free transfer.

The experienced 33-year-old will join the Hammers on 1 July, after his contract with La Liga club Espanyol expires, on a two-year deal with the Club having the option for a further 12 months.

Roberto, who has played more than 300 senior matches in Spain, Portugal and Greece, winning six trophies and appearing in the UEFA Champions League, is looking forward to a new challenge with the Hammers.

“From the beginning when I knew I was going to come here, I was very excited about the new experience," said the stopper, whose full name is Roberto Jimenez Gago. "I consider this step a big step in my career. I think everyone who follows football knows the importance of this Club, so I’m really excited.

I think everyone who follows football knows the importance of this Club, so I’m really excited

Director of Football Mario Husillos is familiar with Roberto's work and believes West Ham have signed a top goalkeeper.

“I worked with Roberto during my time at Malaga," he confirmed. "He is a fantastic goalkeeper, who has a great deal of experience in football, having played at the highest level.

“During his time at Olympiakos, I spoke regularly with the coaches and many of them spoke about Roberto as one of the biggest goalkeepers in the history of the club.

“He is at a brilliant age for a goalkeeper, and we are extremely happy to bring him to West Ham United. He is a brilliant professional and a brilliant person. He has all the qualities to play in the Premier League and be very successful.” 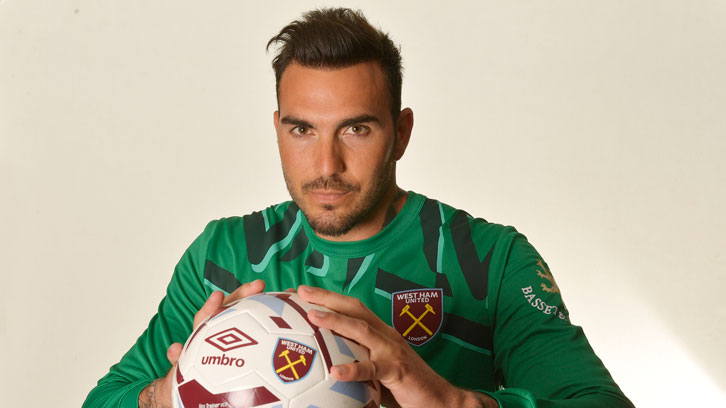 Born in Madrid, Roberto began his career with Atletico in the Spanish capital, playing regularly for the B side as a teenager before making his first-team debut at 19 in a La Liga fixture at Osasuna in December 2005.

After spending a season on loan at Segunda Division club Gimnastic de Tarragona in 2007/08, and a year at Recreativo de Huelva, he returned to Atletico in 2009, making his UEFA Champions League debut at FC Porto that September.

The 2010/11 season proved to be a breakthrough campaign as Roberto served as No1 for Portuguese giants Benfica, winning the League Cup and reaching the UEFA Europa League semi-finals as part of a team that also included David Luiz, Pablo Aimar and Oscar Cardozo.

The next two years were spent back in Spain’s top flight with Zaragoza, before he moved abroad again in summer 2013, joining Greek side Olympiacos.

A return to Spain saw him join Espanyol in June 2016, before spending the 2017/18 season as first-choice on loan at Malaga.

At international level, Roberto was capped at every age-group level and was part of Spain’s squad at the UEFA European U21 Championship finals in 2009.

Everyone at West Ham United would like to welcome Roberto to London Stadium and wish him all the very best for his career in Claret and Blue.