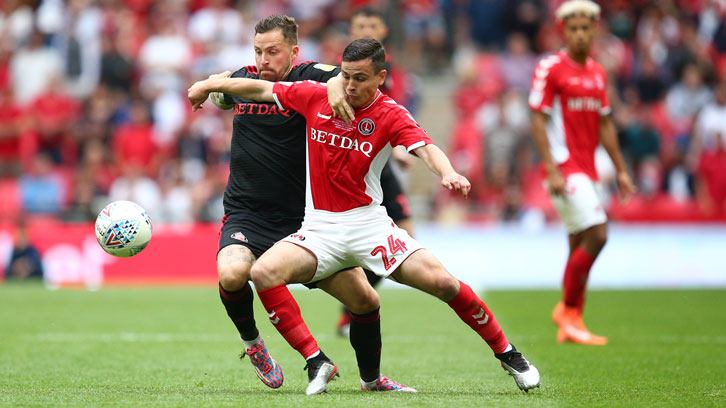 Josh Cullen was in outstanding form yet again to inspire Charlton Athletic to a dramatic EFL League One Play-Off final victory over Sunderland.

The on-loan West Ham United midfielder provided the cross which led to Patrick Bauer’s last-minute winner as the Addicks came from behind to defeat the Black Cats at Wembley.

Former Hammer Lee Bowyer’s south Londoners gave themselves it all to do when a goalkeeping error from Dillon Phillips saw Naby Sarr put through his own net inside five minutes.

Ben Purrington levelled ten minutes before half-time and, following a closely fought second half, the game looked to be heading for extra-time.

However, Cullen collected wide on the left, curled in cross and, after seeing his initial header blocked, Bauer swept in from six yards to send the 35,000-plus Charlton fans in the stands wild.

The 23-year-old was superb all afternoon at the Home of Football, having more touches of the ball and making more passes than any other Charlton player, providing three key passes and making four clearances.

He ended his loan spell with the Addicks with six assists and a goal from 32 appearances.

Victory in Sunday’s final not only saw Cullen help Bowyer’s side win promotion, but also helped him overcome the disappointment of losing the same fixture during a loan spell with Bradford City two years ago.

The Academy of Football graduate will now join up with the Republic of Ireland squad for UEFA 2020 qualifiers with Denmark and Gibraltar on 7 and 10 June respectively, when he will hope to make his senior international debut at the end of a memorable campaign.