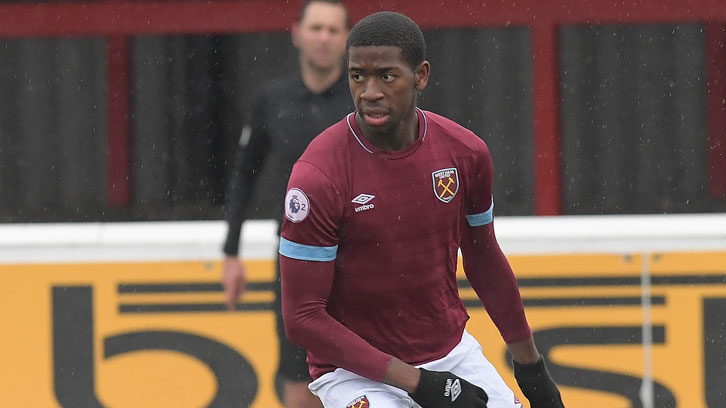 West Ham United youngster Aji Alese has continued a memorable May by being called-up by England U18s for the Slovakia Cup 2019.

Defender Alese was crowned Dylan Tombides Award winner at the recent 2019 Player Awards, having performed to a high level in his 24 appearances at U18, U21 and U23 levels this season.

The centre-back is looking forward to pulling on an England shirt after being named in Neil Dewsnip’s squad.

“It is always an honour to be called up by England, whether it be just a training camp or competitive fixtures a call up is always met with a smile on the faces of my family and I,” he said.

“After finishing the season strongly with the 23s and training a few times with the first team, it’s amazing to know that my performances are being recognised by others outside of the club and not just internally.

“I am very much looking forward to the tournament. It has been a little while since I’ve been with England so it will be good to re-connect with the staff and players. We also face some tough opposition so that will be a good test and with the games in a short period of time it will be a good way to end the season physically.”

It is always an honour to be called up by England, whether it be just a training camp or competitive fixtures

Alese became a full-time Academy of Football scholar in summer 2017, having already featured a number of times at U18 level while still a schoolboy.

The defender continued to progress, making his U23 debut in Premier League 2 in August 2017 and establishing himself as a dominant and inspirational figure in the side.

At international level, he has been capped by England at U16, U17 and U18 levels, appearing for the Young Lions at the 2018 UEFA European U17 Championship finals, and will now get another opportunity to impress after being selected for the annual Slovakia Cup competition.

The eight-nation tournament will see the Young Lions face Russia, 2018 winners and hosts Slovakia and Mexico between 20-23 May, with the group winners qualifying for the final on 24 May. The other group consists of Czech Republic, Ukraine, Croatia and Spain.

England kick-off against Russia on Monday 20 May in Zlate Moravce before taking on Slovakia the following day in Ziar nad Hronom, before completing their Group A fixtures by facing Mexico in Zlate Moravce on Thursday 23 May. The final and placement matches will be held in four different locations on Friday 24 May.

West Ham United would like to wish Aji and his England teammates all the best in Slovakia!