Arnautovic: It's amazing for the fans, so I’m very happy

Marko Arnautovic was ‘very happy’ for West Ham United supporters, his teammates and himself after signing off the season with a goal in a 4-1 Premier League win at Watford.

The Austrian attacker made it ten top-flight goals for the season for the second year in succession, becoming the first Hammer since Carlton Cole in 2010 to achieve such a milestone, with a clinical close-range finish at sun-soaked Vicarage Road.

The victory meant West Ham ended 2018/19 with three consecutive wins and tenth in the table, but Arnautovic is targeting an even better campaign next term.

Every year we want to improve and we want to do better and obviously we want to always be in the top half of the table, but I think it’s not our target to be tenth but to be much higher

“We were already very happy with the performance against Southampton, but we wanted to be in the top half of the table,” he began. “We were focused the whole week because we wanted to finish well this week and it was an amazing win, 4-1. It’s amazing from us and amazing for the fans, so I’m very happy.

“Every year we want to improve and we want to do better and obviously we want to always be in the top half of the table, but I think it’s not our target to be tenth but to be much higher.

“We missed some of those games against the teams around us and lost those games and next year we want to win them and finish higher next season.” 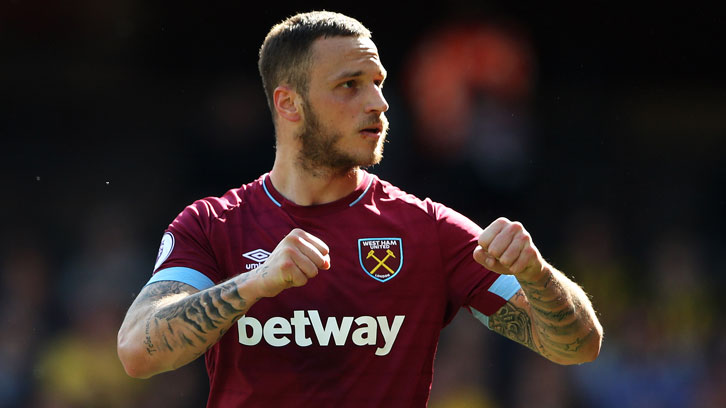 Arnautovic has himself returned to his best form in the final weeks of the season, setting up Michail Antonio’s historic winner at Tottenham Hotspur before scoring twice in the 3-0 home win over Southampton and again as West Ham swept aside the FA Cup finalists.

Those performances have been met with vociferous approval by the Claret and Blue Army – a reaction appreciated by the forward.

The No7 will now enjoy a break with his family before joining up with the Austria squad for UEFA Euro 2020 qualifiers with Slovenia and North Macedonia at the start of June.

“My job is to score goals,” he said. “I’m not this kind of guy who says before the season ‘I want to be top scorer’ but if I am top scorer, I am top scorer and I am happy for this, but I always try to help my team.

“It’s nice to hear the supporters behind me, 100 per cent. Again, it was nice weather and they came for the last game of the season to support us and, like always, they supported us to the end.

“I think they had a lot of joy and now we can all enjoy the holidays and take some time off. I’m still playing internationals, but I will enjoy the time off with my family.”