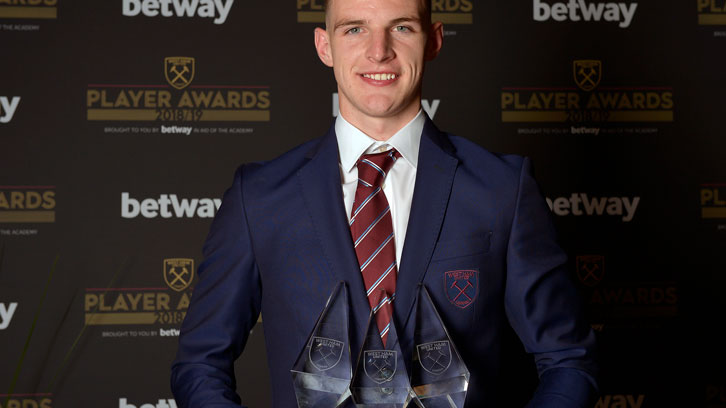 Declan Rice went home from Wednesday’s 2019 Player Awards brought to you by Betway in aid of the Academy, with no less than three trophies.

The outstanding 20-year-old won the acclaim of his teammates with the Players’ Player of the Year award, of the Claret and Blue Army with the Individual Performance of the Season award for his match-winning display against Arsenal, and of Academy Manager Terry Westley with his third consecutive Young Hammer of the Year award.

Rice, who was also voted runner-up for the Hammer of the Year award for the second straight season, was naturally delighted with his success on a memorable night at the Intercontinental London – The O2.

It makes me really happy for my teammates to have voted for me, that’s up there with the best moments in my career so far

“The Players’ Player award has got to be the best,” he smiled. “It’s really special for me, being the youngest in the team and seeing what they think of me as a person and as a player.

“It makes me really happy for them to have voted for me, that’s up there with the best moments in my career so far.

“My Dad was here tonight, but I sent him home early to set up the cabinet! I’m only joking!”

Looking back on his second season as a first-team regular, Rice not only cemented his place in Manuel Pellegrini’s team in a deep-lying midfield role and scored his first Premier League goals, but he also became a full England international.

“I’ve been lucky enough to have played consistently for pretty much my whole career and last season I was saying the same thing – can it get any better?” he continued.

“I won Young Player of the Year last year and this year I’ve won it again and collected two more. It’s really special but I’ve taken it all in my stride and tried to get better. I’m really happy.”

“Hopefully I can win the full house next year! The main one is obviously Hammer of the Year and I’d love to collect that, of course, but Lukasz Fabianski deserves it this year as he has been our best player.

“It’s been a great season and to win three awards, I appreciate everything the manager, my teammates and my family have done for me.”