Terry Westley to step down as Academy Manager 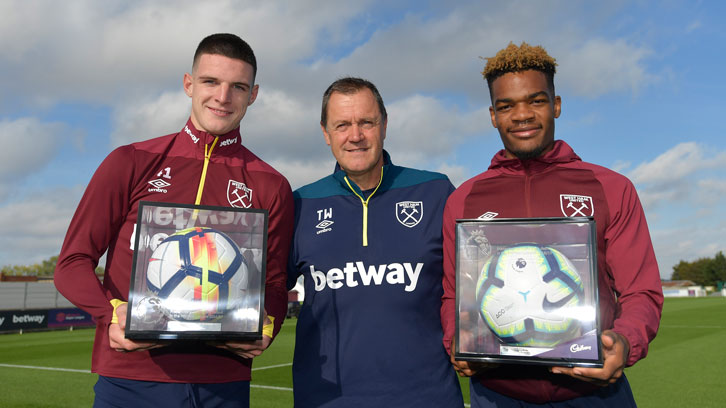 West Ham United can confirm that Academy Manager Terry Westley is to leave the Club this summer after five hugely successful years in the role.

Westley, who joined the Hammers in July 2014, has overseen the creation of a new internal development programme leading to the progression of several players from the Academy ranks to first team honours in recent seasons, including our latest full England international Declan Rice, and Grady Diangana and Ben Johnson, who have both made Premier League debuts this season under Manuel Pellegrini.

The 59-year-old has also presided over the plans for the brand new multi-million pound Academy redevelopment at the Chadwell Heath training ground that was officially opened last month to much acclaim, providing the Club’s Academy scholars and schoolboy players with a magnificent new facility that will ensure West Ham United remains at the forefront of player development going forward.

With the Academy now entering an exciting new era and the future looking bright, following 38 years working in Club football a unique opportunity has arisen for Terry to undertake a Technical Director role overseas, and he feels it is the right time for him to move on to a new adventure and challenge.

Terry Westley said: “I leave West Ham United feeling huge pride and with great memories of my time here. We have made such positive strides forward in the last five years to modernise and evolve the Academy, ensuring that West Ham’s long-standing reputation as one of the finest developers of young players continues to shine.

“It was an extremely proud moment earlier this season for me to see four Academy graduates – Declan Rice, Grady Diangana, Conor Coventry and Joe Powell – playing together for the first team in the League Cup tie against Macclesfield Town. That gave everyone in the Academy such huge satisfaction, validation that our model is working, and belief that more young players will follow them in the future. My thanks goes to our immensely supportive Manager, Manuel Pellegrini, and his staff, for giving the young players their opportunities.

“It has also been a huge satisfaction to witness the opening of our fantastic new Academy facility at Chadwell Heath in early April. Everyone who has visited so far has commented on how it has transformed the environment for the benefit of our young players, and I have no doubt that it will be a huge asset to the Club in the years to come.

“Myself and the Board were both in agreement that the time is now right for a change. I am looking forward to new adventures with my family and to stepping away from the constant and daily demand of a full-time role within an Academy, and now it is time for someone else to take the reins going into a very exciting period for the Club. As an Academy, you have to continue evolving and moving forward, and it is important to keep a fresh approach, allowing those who have worked so hard to step up and take the reins.

“I would like to place on record my thanks to the Joint-Chairmen and Vice-Chairman for their magnificent support and backing during my time here. They truly understand how important the Academy system is to the future success of the Club and deserve great credit for their commitment and investment in the new facility at Chadwell Heath.

“I would also like to say a special thank you to our Club captain, Mark Noble, who has been such a positive and supportive influence on the Academy in recent years. To have such a fantastic leader in the background, following our junior teams, genuinely caring about their development, is a huge asset for the Club and we should all be very grateful to Mark.

“Finally, my ultimate thanks go to the players, coaches and staff within the Academy, whom I have had the biggest pleasure working with over the past five years. Our young scholars are in the very best hands and I have no doubt that the Academy will continue to flourish and go from strength to strength in the coming seasons.”

Joint-Chairmen David Sullivan and David Gold said: “Terry leaves West Ham United with our very best wishes and thanks for his magnificent contribution to the Club in his time here. The Academy is now in its healthiest position for many years, and the foundations that Terry has helped to put in place will ensure that we can continue to build on our recent success in producing homegrown stars for the first team, as well as attracting the best young players in the country.”

Terry will step down from his role following the Club’s end of season Player Awards ‪dinner on Wednesday. His departure follows that of Under-23 Coach Liam Manning, who has left to join New York City FC in the USA as Academy Coaching Director.

Everyone at West Ham United would like to sincerely thank Terry and Liam for their fantastic dedication and service to the Academy in their time at the Club and wish them both all the very best in the future.

Academy Operations and Player Development Manager Ricky Martin, who joined the Club in January after 15 years as Academy Manager and then Technical Director at Norwich City, will take the helm, with further senior appointments due to be made imminently around the exciting changes taking place at Chadwell Heath, where the Club’s iconic Academy of Football heritage continues to attract the most impressive candidates when recruiting coaching, technical and development staff.