Longelo at the double as West Ham U18s thrash Leicester 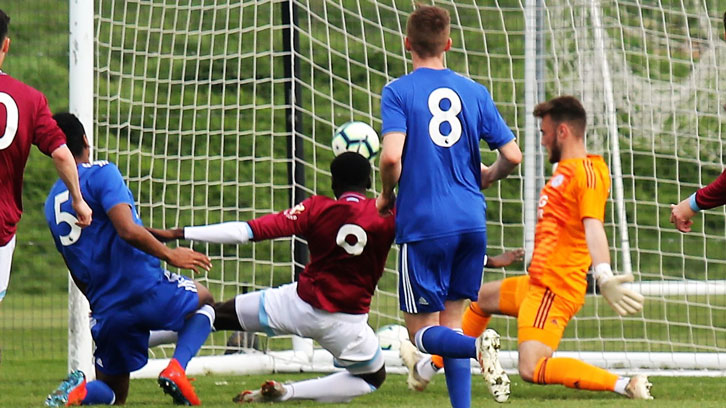 The Hammers rose to fifth in the table after scoring twice in each half at Little Heath, registering a victory that also ended their three-match losing run.

Longelo netted his fifth and sixth goals of the season to bookend strikes from Bernardo Rosa and Veron Parkes.

The 18-year-old forward opened the scoring on 15 minutes from Rosa’s pass before Luke Thomas equalised for Leicester nine minutes later.

Midfielder Watson then made the first of three goals for the Portuguese forward, putting the Irons back on top on the stroke of half-time.

An entertaining game saw both teams create chances in the second half, but it was Parkes who settled matters eight minutes from full-time, converting Watson’s assist to make it 3-1 to the home side.

And Longelo completed a fine afternoon’s work for the Hammers three minutes later, converting yet another Watson pass to ensure Mark Phillips’ side still have a decent chance of securing a top-four finish.

Prior to kick-off, both teams had shown their support for the Premier League’s No Room for Racism and Kick It Out anti-discrimination campaigns.

West Ham will seek to make it back-to-back U18 Premier League South wins when they travel to Chelsea on Saturday 6 April at 11am.