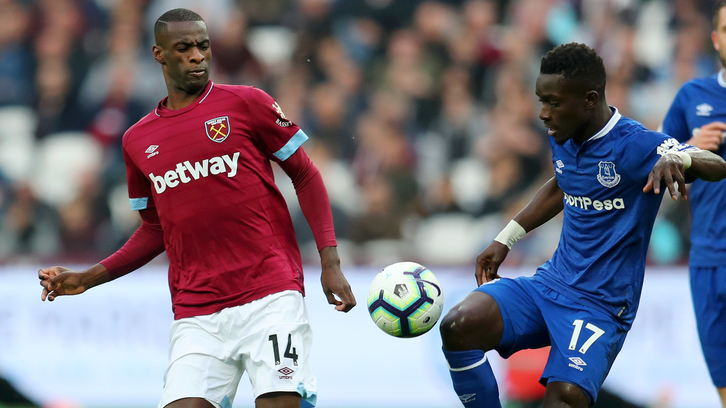 Kurt Zouma’s fifth minute header and Bernard’s easy finish on 33 minutes secured the points for the visiting Toffees against an Irons side that struggled to match the away team.

Manuel Pellegrini’s Hammers boast the record for most points earned from deficits in the Premier League this season – picking up 15 points in games they have been behind in – but there was no sign of a repeat for West Ham in this match.

Everton took the lead just five minutes into Saturday’s fixture. It came from a corner kick, which Zouma beat Issa Diop to, heading the ball into the turf in front of him. The trajectory and angle was just right, seeing the ball bounce over a leaping Aaron Cresswell, and finding the net.

It was a slow start for the Irons, and Everton kept the pressure coming. Pablo Zabaleta flashed a volleyed effort wide on 26 minutes, in West Ham’s first chance of note.

The Toffees doubled their advantage just after the half-hour mark. The away side cut through the West Ham defence, with Seamus Coleman ghosting past Cresswell, before sending a low ball across the face of goal. Bernard was never going to miss, tapping in from two yards.

In truth, it was no more than Everton deserved, and if not for Lukas Fabianski, West Ham’s deficit could have been even larger. The shot-stopper denied Dominic Calvert-Lewin, Gylfi Sigurdsson and Lucas Digne from efforts that all looked destined for the net.

Robert Snodgrass’ first-time curling effort as the first half drew to a close had Jordan Pickford reeling, but Everton entered the London Stadium changing rooms at half-time in control.

Manager Pellegrini looked to spur his side into action for the second half, making a double change at the break. Chicharito – who scored two crucial goals against Huddersfield – was introduced for Lucas Perez, while Michail Antonio came on in place of Pedro Obiang.

The move saw the Irons revert to a three-man midfield, with Snodgrass and Manuel Lanzini playing alongside Declan Rice in the centre, while the introduced Antonio and Chicharito supported Arnautovic up front.

Despite the changes, opportunities were limited as West Ham pressed to get back in the game. Lanzini dribbled well into space, but could not get a meaningful shot away.

Richarlison struck the woodwork for Everton with a headed effort, but the Toffees had done their hard work in the first period, leaving Stratford with the three points.