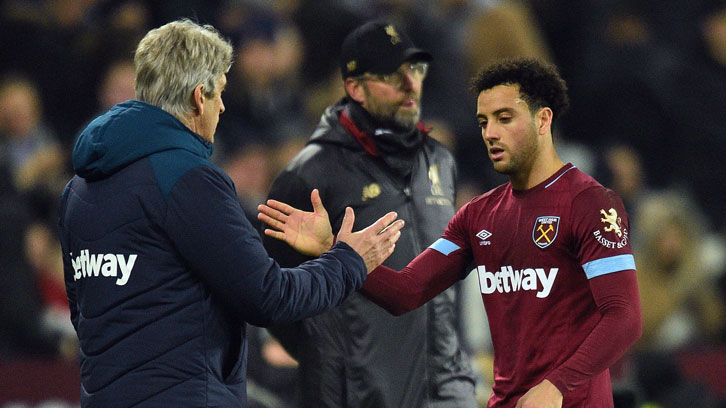 Felipe Anderson has thanked Manuel Pellegrini for helping him earn a recall to the Brazilian national team.

That form saw the Hammers No8 return to international duty this week after being included in Tite’s squad for friendlies with Panama – in the Portuguese city of Porto – and Czech Republic.

“I’ve always said that it was a dream to go to the national team,” said Felipe Anderson, who made his only previous full appearance in a friendly against Mexico in 2015. “The coach (Pellegrini) gave me his trust to play constantly, to get into a rhythm and I’m very happy and excited to get there and be with my national teammates.”

While he may only have one senior cap for the Selecao to his name, Felipe Anderson is no stranger to international football.

He was capped at U17 and U20 level before representing Brazil at the 2016 Olympic Games in Rio, where he won a Gold Medal playing alongside the likes of Neymar, Rafinha and Gabriel Jesus.

This summer, Brazil plays host to the South American continental championship, the Copa America, and the 25-year-old would love nothing more than to be involved in a big tournament in his homeland again.

However, the West Ham star knows he needs to keep producing the goods, both in Claret and Blue and Green and Gold, if he is to earn a place in Tite’s squad this summer.

“Copa America is a great opportunity, but I have to think of the present first,” he confirmed. “I have to do well at West Ham, then be called up

“This is the first time I have worked with this staff so I have to go and play well and take it one day at a time.”