West Ham United are delighted to confirm that Ben Johnson has signed a new contract, keeping the defender with the Club until at least the summer of 2022.

The 19-year-old made his Premier League debut in February at Manchester City, and has trained with Manuel Pellegrini’s first-team squad regularly this season.

A regular for Liam Manning’s U23 side, the full-back has played 16 times in Premier League 2 Division 1 and three times in the Checkatrade Trophy this term and is considered one of the Academy of Football’s brightest prospects.

Upon signing his new deal, Johnson said: “It’s great. First of all, I want to thank God for blessing me with this opportunity, to be playing football at this massive Club. Extending my stay here is fantastic news for me and my family.”

Johnson has been with West Ham United since the age of seven and was converted from a winger into a right-back after impressing in that position.

The versatile defender is the latest in a succession of Academy of Football products to commit their future to the Club in recent months, following the contract extensions signed by Declan Rice, Grady Diangana and Nathan Trott.

Having tasted the Premier League for the first time when he produced a calm and committed performance at the Etihad Stadium, Johnson is determined to build on that opportunity and longer term become a regular in the first team.

He continued: “It has been a whirlwind (since making my first-team debut). I found out that I was playing at Manchester City the day before. I was nervous straight away, but then I felt calm and ready to play, told myself I deserve to be at this level now. I’ve kept working hard each and every day and hopefully there are more opportunities to come.” 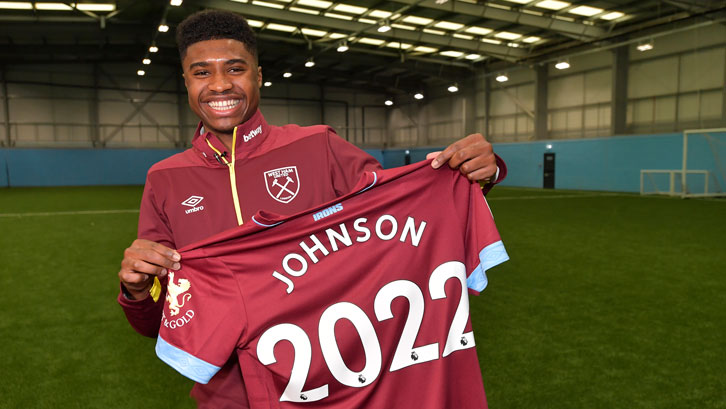 It should come as no surprise that Johnson is making a success of his future career, when you consider his footballing pedigree.

While his famous family members have undoubtedly had positive influences on his career, Johnson says the Academy coaches have done likewise during his 12 years and counting in Claret and Blue.

“I’m so privileged and blessed to be playing for West Ham, it’s great,” the teenager confirmed. “I’m very proud.

“It’s been a rollercoaster really, coming here at seven, through the age groups, 12, 14, didn’t think I would get a scholarship, then 16s, 18s, and really pushing on. It’s been a great journey, and I only look back now to see how far I’ve actually come.

“There are so many who have helped me along the way, I can’t say them all! Jimmy Hampshier, Ian Yuill, Danny Searle, James Gritt, Liam Manning, Pottsy, Mark Phillips, Terry Westley…so many.”

West Ham United would like to congratulate Ben on signing his new contract and wish him well for his future career in Claret and Blue.