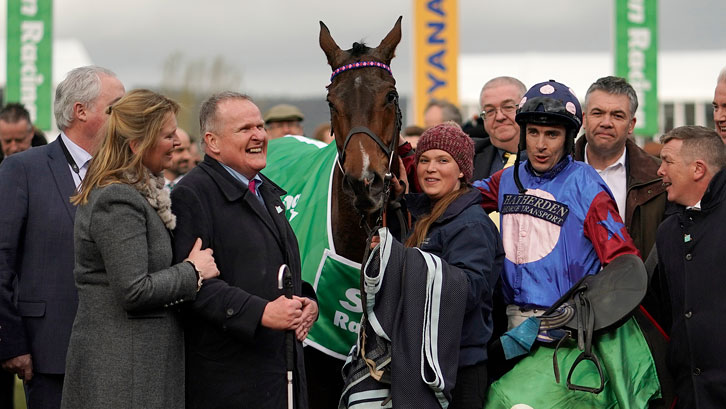 Shropshire-born former shop steward and Westminster Council official Gemmell, who started supporting West Ham when he went along to the Boleyn Ground with workmates after moving to London, has been blind since birth.

However, he has a sixth sense that has seemingly helped him uncover winning thoroughbreds like seven-year-old Paisley Park, which romped to victory by a distance of two-and-three-quarter lengths.

His jockey, Aidan Coleman, wore Claret and Blue silks as he rode the 11/8 favourite across the finish line.

Gemmell, who relies on on-course commentary to follow his horses whenever they race, continued the Hammers theme by wearing a West Ham scarf as he collected the Stayers’ Hurdle trophy in the winners’ circle.

A regular in the Black Lion pub in Plaistow that was once a post-match haunt of the likes of Bobby Moore, the 66-year-old is also a regular at London Stadium, where he holds a Season Ticket and his friends commentate to keep him informed of the on-pitch action.

Fittingly, his favourite player is another Hammer who has enjoyed a memorable March – Billy Bonds.

Everyone at West Ham United would like to congratulate Andrew, Aidan and Paisley Park on their big win!